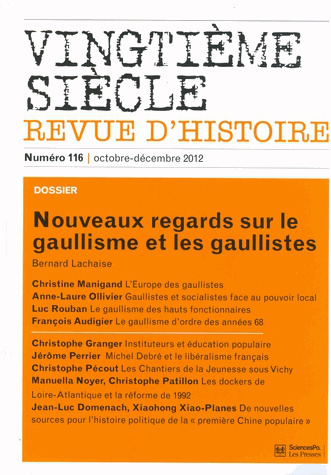 Europe and the Gaullists: Essay on Where Gaullists Stand in European Assemblies
Christine Manigand
Relations between political groups and the Gaullist European parliamentary institutions have never really been analyzed. In an attempt to enlighten these relations, the author thoroughly examines the behavior of the Gaullist representatives in exercise after the Hague Congress of 1948 and until 1979, marking the elections by direct universal suffrage of the European Parliament, in the diverse European assemblies. If the Gaullist attitude regarding the European construction was never monolithic or univocal, this article strives to illuminate the even greater complexity than it already seems at first sight, perhaps influenced by the more friendly atmosphere of the first European assemblies.
Key words: Europe, politics, Gaullists, European assemblies, European Parliament.


Gaullists and Socialists as Seen Through the Lens of Local Power: The Example of Marseille
Anne-Laure Ollivier
While the history of socialist and Gaullist relations is well known, the local scene reveals another view. Through the example of Marseille, this article shows how people, culture, and local politics shaped this history: in opposition to each other when the Gaullists won city hall in 1947, Socialists and Gaullists became allies after Gaston Defferre's electoral victory, between 1953 and 1965. From then on, the Marseillaise political scene was the opposite of the national one: Gaullists in the opposition, and Socialists in power. Finally, local history shows how the SFIO overcame the challenge of the Fifth Republic by retreating to local positions. Conversely, the Gaullists' failure to regain city hall after 1953 is seen as symptomatic of that movement’s difficulties to win power locally.
Key words: Socialism, Gaullism, Marseille, Gaston Defferre, local power.


Gaullism and High Civil Servants (1958-1974)
Luc Rouban
Gaullism in High Civil Service between 1958 and 1974 was not prevalent. The use of empirical data banks shows that the high civil servants were less interested in Gaullism in 1958 than in the left or the center. After 1958, the proportion of MPs coming from the senior civil service was about the same as that coming from the Centrists and the Socialists. Contrary to what has often been argued, the "bureaucratization of politics" in the Fifth Republic was not the work of the high civil servants. Moreover, the Gaullist approach was to grant a lot of autonomy to the different departments and so the civil servants did not play party politics, preferring to focus on their professionalism. The prosopographic study of the prefects as well as the "Inspection of Finances" shows that the Gaullist involvement was very limited. The high civil servants used Gaullism to advance their social power.
Key words: senior civil service, high civil servants, prefects, Inspection of Finances, members of Parliament, ministerial cabinets.


Law and Order Gaullism in 1968
François Audigier
Traumatized by the May 1968 crisis that some Gaullists saw as an organized and secret plan of insurrection, they organized much of their activism and theoretical planning around this subversive threat. These law and order Gaullists, backed by the President’s advisor Jacques Foccart, monitored alerts and prepared counterattacks with associations and individuals set up in networks. They wielded some influence over the Gaullist party, the government, Parliament and the media, acting as a lobby to further, more or less effectively, repression. Although these networks were too disparate to be considered a real political wing, they did constitute within the Gaullism of 1968 an original current different from classic anti-Communism of the RPF (Rassemblement du people français) period.
Key words: Gaullism, right, order, political networks, Jacques Foccart.


The “Small Lantern of Progress” (Magic Lanterns) Primary School Teachers and Adult Education in the Outskirts of Paris (1890-1914)
Christophe Granger
Between 1890 and 1914, primary education, the secular heart of local life, also formed that of an intense work of “popular education”, i.e. of adults. In the evening, after school, the teachers taught the local population, trying to ensure everyone’s access to understanding the world and debating the issues in order to foster the “enlightened citizen” that the republicans were calling for. The “workers’” suburbs at the doors of Paris were particularly active. In addition to night school, the teachers organized lectures accompanied by very appreciated luminous projections. Out of their belief in solidarity, they also led many alumni associations that provided local aid and the socialization of the young by their elders. This education was not merely the remains of the Republic’s school parties. It was the result of the teachers’ involvement in social life, of the flexibility of their profession and of the practical creativity they were able to bring to bear. It also shows how intense the national crusade was in which modern democracy was emerging.
Key words: primary school teacher, adult education, suburbs, transmission of knowledge, local solidarity.

Michel Debré and the Various Forms of French Liberalism (1936-1945)
Jérôme Perrier
As a high-ranking official turned politician, Michel Debré had always given much importance to ideas, which are the necessary prelude to any political action. His rich personal archives bear witness to that and make it possible to pinpoint his intellectual progression between 1936 and 1945, at a time when the liberal values at the core of the French republican model were being severely tested. When he was a young technocrat, Michel Debré painfully experienced the crisis undergone by the parliamentary régime until its collapse in 1940 and was triggered into a short-lived desire for authoritarianism. That was before he joined the Resistance movement, a period which coincided with a form of new liberal synthesis aiming at linking liberty and authority. He was as such the exact contrary of the citizen opposed to any form of power embodied by the philosopher Alain but rather in agreement with the definition of “state liberalism” coming from the great founders of the Third Republic. Hence, a thorough study of Michel Debré’s progression would bring a new outlook to the study of the genesis of the 1958 Constitution.


Loire-Atlantique Dockworkers and the 1992 Reform: The End of a World?
Manuella Noyer et Christophe Patillon
From 1947 to 1992, dockworkers enjoyed a special status which guaranteed their wages even when they were not working, a quite common situation as maritime traffic always fluctuates. Blamed for the low competitiveness of French harbours, this status was regularly questioned by public authorities and private employers, but the power of the CGT trade unions on the docks allowed it to remain untouched for decades. In 1991, the French government finally dared to challenge it; it argued that, if cargo handling in the port was not reformed, French harbours would not be able to cope with international competition. In the Loire-Atlantique region, Nantes and Saint-Nazaire CGT dockworkers, although opposed to the reform, were divided about the best defense strategy to implement. Beyond the question of the dockworkers’ status, it was the whole identity of a specific group that was played out in 1992.
Key words: dockworkers, trade unions, globalization, Loire- Atlantique, social conflict.


New Sources for the Political History of the “First People’s China” (1949-1976)
Jean-Luc Domenach et Xiaohong Xiao-Planes
The political changes in China since 1976 brought about a renewal of official policy in terms of history that has led to the publication of new sources on the history of the first People’s China. For the most part, they concern documentary collections, biographies, memoires and first-hand testimonies of all sorts, among which the most revealing are those from the leaders’ wives and children, and the more recent ones of the victims of calamities. Although most of them can be placed within the official Vulgate, these sources provide incontestable progress in the knowledge of the history of the Chinese regime, of the society formed by its leaders and of some of the local dissent.
Key words: People’s China, political history, source, biography, memoirs.