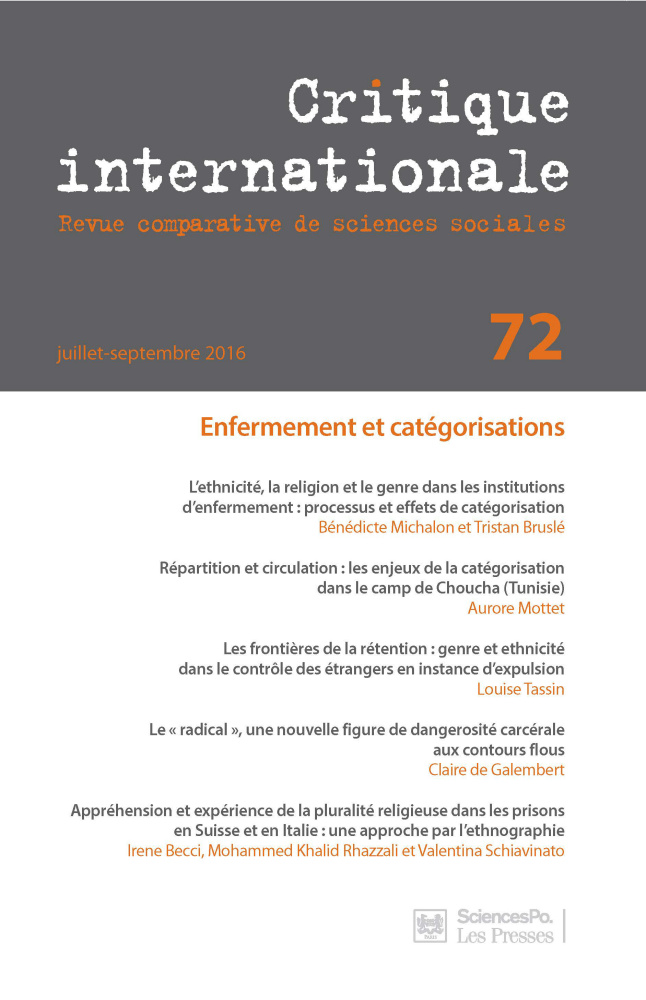 The "thema" of this issue is devoted to tue process ofpeople ranking within the prison institutions in a context of increasing interaction between prison policy and migration policy in the name of peacekeeping and effective organization of life within the walls every day. Read More

Ethnicity, religion and gender in the institutions of confinement: process and effects of categorization

Distribution and Circulation: Categorizing Detainees in the Choucha Camp (Tunisia)

How is the material dimension of the confinement of foreigners linked with the purpose of sites of confinement – that is, managing the movement of migrants via admission or expulsion? The present article examines the distribution of migrants within Tunisia's Choucha transit camp, which, until its closure in June 2013, received Sub-Saharan migrants fleeing fighting in Libya. In order to organize the confinement of a large number of people, the authorities distributed the migrants by reference to categories of national or ethnic group membership. While separating individuals according to nationality allowed the camp's administration to guarantee peace there, it also anticipated the detainees’ future administrative status (refugee, rejected asylum seeker, etc.). Used for the purpose of administering the confinement routine, these national categories reveal the manner in which the camp administration anticipated the prospects open to (or imposed upon) individuals. As the case of the "Choucha refugees" shows, some migrants thus attempted to challenge the categories according to which they had been classified.

The Frontiers of Detention: Gender and Ethnicity in the Supervision of Foreigners Awaiting Expulsion

Based on immersive research in a French detention center, this article examines the manner in which categories of alterity are used and produced in the confinement of foreigners awaiting expulsion. Gender and ethnic frontiers play a key role in the organization of work, inter-professional relations and the manner in which detained foreigners are treated. Indeed, the general operation of the detention center observes a gendered and ethnicized division of labor that, via appeal to a set of naturalized characteristics, determines the tasks assigned the private agents who supply the Center’s staff. Lacking job security, the latter are themselves immigrants and are partly treated in the same manner as the detainees. Moreover, the internal hierarchies of the police, which include a number of women and minority police officers, are predicated on stigmatizing representations of the imprisoned foreigners, representations reinforced by the agents’ working conditions. While detention is promoted as an administrative confinement mechanism, its everyday mode of operation produces and reproduces the conflation of detained persons with delinquents.

The "Radical": A New, Ill-Defined Figure of Prison Danger

The moral panic provoked by the attraction that Islamist violence holds for young people has gone hand in hand with the emergence of a new figure of danger: that of young people who become radicalized in prison. To understand the inner workings and processes that have rendered the “radical” – whether avowed or potential – a new category of penal discourse, one must examine the systems of labelling and detection involved in the construction of what is referred to as deviant. Studying the circumstances, context and actors involved in the implementation of a policy for detecting those originally designated as “converts” reveals that the heterogeneous resistances and appropriations of this tool have not prevented the category from establishing itself. The terminological change that has taken place since 2008 via the attempt to substitute the term “radical” or “undergoing radicalization” for that of “convert” is symptomatic of the Europeanization of anti-radicalization policy, which is centered more on objective of prevention. It remains the case that the lack of a shared understanding of what is a radical – a vague and polysemous term – encourages confusion and stigmatizing conflation, exposing all Muslims to suspicion even when it seeks to neutralize this stigma.

Perception and Experience of Religious Plurality in Swiss and Italian Prisons: An Ethnographic Approach

For over twenty years, social and cultural globalization have fed the emergence of unprecedented religious plurality in Swiss and Italian prisons. For penal institutions that guarantee freedom of worship and conscience, this “super-diversity” leads to new arrangements and an effort to formally oversee religion (chaplaincies, meals, religious celebrations). The inmates, for their part, draw upon their religious experience in various ways, sometimes as a means for resisting the institution, sometimes in the form of “private” practice or official demands. An ethnographic and epistemological approach sensitive to the situation and enriched by several years of research conducted since 2005 allows one to consider the religious categories used by penal institutions while exploring the manner in which the prisoners’ agency is reflected in their appropriation of religion.