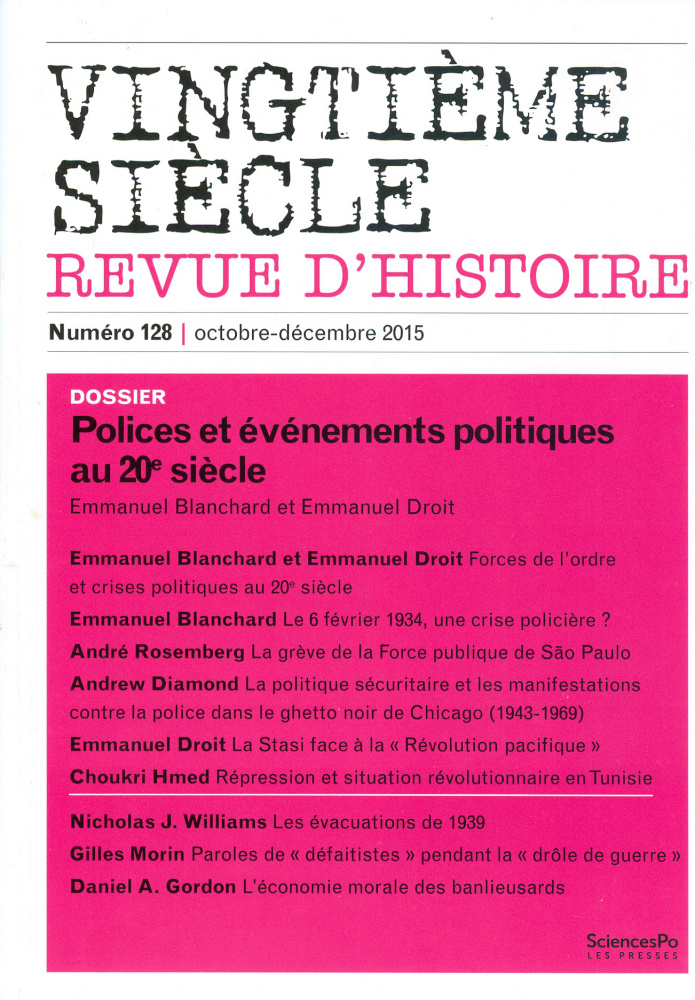 Law Enforcement and Political Crises in the 20th Century

The articles contained in this issue address the relationships between different political regimes, their police forces and civil societies in a wide range of different geographical locations throughout the 20th and 21st centuries. Although rooted in different national historiographical traditions, these articles all contribute to the renewal of social and cultural political history. By adopting a relational perspective to power and its diffusion, these articles recast security forces as political actors, in turn analysing how these forces manage political crises. As security organs have helped to foster but also to contain various revolutionary dynamics, they should therefore form the centre of a new political

This article analyses the Força Pública strike in São Paulo that took place on 13 and 14 January 1961. The Força Pública was Sao Paulo's military police, which traditionally policed the city streets while armed and in uniform. The strike occurred during the serious socio-political turbulence of the early 1960s, when the Brazilian democratic regime that had been established in 1946 was crumbling. In hindsight, the Força Pública strike presents a condensed picture of all of the ideological disputes regarding the police's corporate interests and the country’s political future.

In the second half of the 1960s black power organizations in Chicago rallied unprecedented numbers of young African Americans to participate in insurgent protest actions by focusing on the issue of police brutality. This essay demonstrates the ambiguous role played by anti-police protest to the broader civil rights struggle in Chicago, arguing that such an approach ultimately proved divisive for black communities and hampered them from pursuing a more ambitious agenda of demands. This was due, in large part, to the centrality of law-and-order politics within black Chicago, which made many key civic and religious leaders resistant to support anti-police protests.

The goal of this article is to analyse East Germany’s 1989 'Peaceful Revolution’ by emphasising this movement’s open and uncertain character. Using the archives of the East German political police, this article argues that the abrupt collapse of the German Democratic Republic (GDR) and the Communist regime was caused less by the actions of a powerful opposition movement, than by the political regime’s (in)ability to react. Violence appeared to be a serious option until the fall of 1989; by the time they had to act, however, the members of the Sozialistische Einheitspartei Deutschlands (SED - Socialist Unity Party) politburo no longer considered violence a legitimate means. As a consequence, the Stasi was rendered powerless and made the peaceful revolution possible.

The sociology of social movements has long neglected the repressive dimension of mobilisations. Based on ethnographic fieldwork carried out in Tunisia between 2011 and 2012, this article assesses the role of the State’s "paroxysmal violence" during revolutionary situations, focusing on interactions between representatives of the regime, the police, protesters and bystanders. It demonstrates how, in a broad sense, repressive practices helped to shape protests against the Tunisian regime during the first revolutionary period, from 17 December 2010 to 14 January 2011. Repression can therefore be viewed as one mode of action employed among others by State officials in order to put an end to protest movements seeking to undermine the regime’s legitimacy.

The 1939 Evacuations in the Moselle and Saarland Regions: Framework and Strategic Plans for Managing the Civilian Population

Following the German invasion of Poland in September 1939, more than 500,000 civilians were evacuated on each side of the French-German border. For these civilian refugees, totalling more than 1 million, the ten months that followed were a kind of 'domestic exile’. For obvious reasons, this evacuation was not organised overnight. Although preparations for evacuation had begun a lot sooner in France than in Germany, both countries experienced significant changes with regard to the measures they had originally envisioned. This article analyses the evacuation planning for civilians residing between the Maginot and Siegfried fortified lines, and establishes an in-depth comparison between the two programmes.