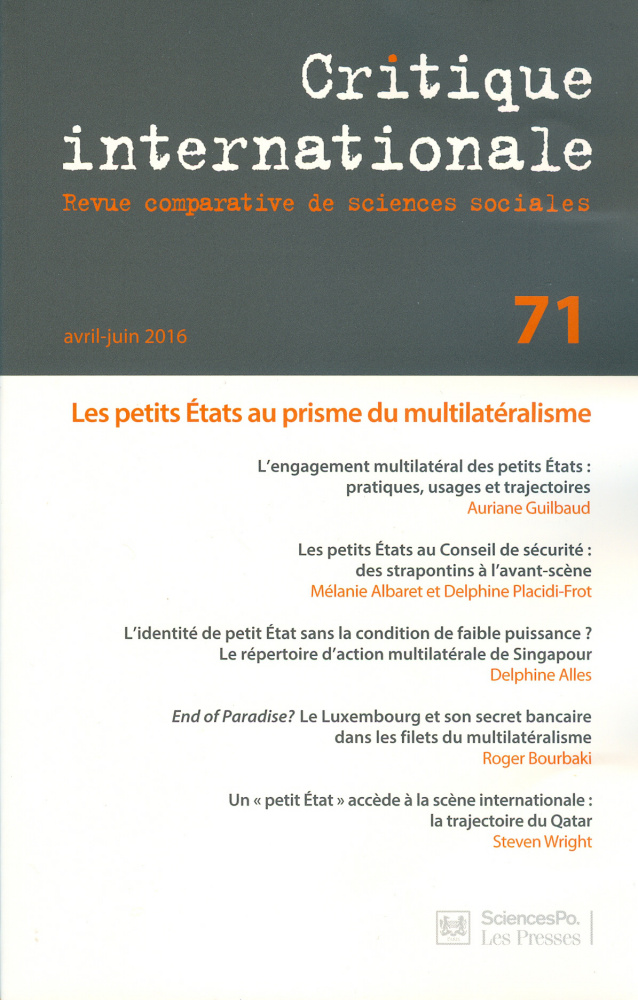 Small States at the Security Council: From the Background to Center Stage

How do the Security Council's practices and discussions contribute to defining "small states" as a political category? Inversely, how do states which present themselves as "small states" influence Security Council negotiations? If the attempts to define a specific legal status for small states have never been successful for political reasons, the international prioritization process at work in the Security Council has become more complex. Absent states in the body have been downgraded to the point of becoming insignificant. Therefore, states increasingly take action to participate. Once at the negotiating table, those states which consider themselves small, or are considered as such, fall according to their practices into three groups. They are either onlookers simply making an appearance, silhouettes that occasionally express themselves, or supporting actors which strive to replicate permanent and reccurring members of the Security Council and influence long term working methods and negotiation practices of the Council. ■

The Small State Identity without the Weak

In international relations, it is common to associate, or even superimpose, the notions of "small states" and "weak power". Yet, small states mobilize resources and a repertoire of actions in multilateral negotiations to allow themselves to assert their interests against negotiation partners at first seemingly more powerful than them. Singaporean officials have endeavoured to maintain a small state identity (despite characteristics that would invalidate this label). Meanwhile, Singapore has avoided the “weak state” condition to weigh on negotiations which it considers a priority (particularly in the areas of international trade and maritime law). This policy is based on the deployment of a diplomacy network which offsets the numerical weakness of the diplomatic apparatus, and a technocratic soft power, which helps to create an international environment conducive to the interests of the city-state. However, the ad hoc and selective nature of Singapore's commitment in multilateral negotiations is a limitation that should be included in the definition of small states. ■

End of Paradise? Luxembourg and Its Banking

Secrecy in the Net of Multilateralism

What are the resources of a small state when it is exposed to major international pressure? The manner with which Luxembourg negotiated the end of banking secrecy for more than fifteen years at the European and international levels demonstrates that committed participation, controlling operating rules of international organizations, delaying and imposing conditions, responding to political transformations, and forming alliances are all instruments which allow a small state to defend its interests successfully. Through the study of Luxembourg's resilience, one understands why a multilateral negotiations withdrawal strategy can lead a small state to be deadlocked and should be, therefore, a one-time response to crisis situations. Conversely, even though it is impossible to win in bilateral relations with a large country, it turns out that a selective multilateral engagement strategy can turn a small state into a true force multiplier. ■

The Emergence of Qatar as a Small State Actor

Although Qatar is a clear example of a small state, it has successfully risen as a prominent international foreign policy actor using its considerable clout as one of the largest exporters of liquefied natural gas (LNG). This has made Qatar a unique example among smaller resource rich states. It has notably and intensely deployed soft power and mediation for ambitious security objectives, internal development, and visibility. Qatar’s foreign policy diverges from the norm of small state actors’ usual multilateralism, which is explainable by two factos. First, the role of energy relationships has proved very important in defining Qatar’s bilateralistic approach. Qatar supplies liquefied natural gas (LNG) on long-term contracts, allowing it to have strategically unique energy security relationships on a bilateral basis. Additionally, Qatar has personalized its foreign relations decision making processes rather than maintaining a bureaucratic structure, rendering classical and formalized multilateralism incompatible with Qatar’s current foreign policy approach. ■

Regional Integration and Leadership in South America: The Complex Rise of a Brazilian Led Pole

South America is one of the most dynamic regions in terms of integrationalist initiatives. This regionalism accompanies the process of globalization and allows the continent to affirm itself in the context of ever

present global interdependence. In this configuration, how can we understand Brazil’s foreign policy choices? In fact, the Lusophone power seeks to create a South American pole to maximize its insertion into the new multipolar international system. Brazil’s strategic rapprochement with its neighbors nonetheless carries mutual distrust and rivalries between actors in the region. Brazil is thus ensuring the building of a regional leadership on the basis of “consensual hegemony”, by seeking approval from its neighbors in its immediate geopolitical space. It is an attempt for Brazilian policy makers to move beyond a short-term strategy in terms of defending their national interests, by obtaining the approbation of neighboring states to a truly collective project. This will imply that Brazil incurs some of the necessary costs of leadership. ■

The Role of the American Congress in the Foreign

Many recent studies insist that Congress negatively obstructs foreign policymaking, particularly in international negotiations. Nevertheless, it seems that the American legislative body can weigh in positively and have a constructive influence on the final result of negotiations, namely the text(s) of treaties and/or negotiated agreements. Analyzing Congress’ role illuminates the sociology of foreign policy decision making proposed here. This analysis shows in particular the value of presidential expertise in dealing with parliamentarians, the deep seeded presence of lobbying in the American political system, and the informal political world’s importance that must be considered in any sociology of decisionmaking in the United States. The study of these interactions between formal and informal frameworks shows the effectiveness of transinstitutional coalitions in the American foreign policy decisionmaking process. ■

An Itinerary to a Structuring Concept in Political Science

Better known today under the name “pluralistic society” or “divided society”, “plural society” has been a transitional concept in political science since World War II. Indeed, the political stability which certain societies containing various cultural groups have experienced has resulted in a major field of research: consociationalism. Meanwhile, the recurrent instability in some of these societies has aroused extensive investigations into the causes of community conflict. Few sociopolitical realities would have been as determining in the structuring of a discipline. Yet, a conceptual vagueness, driven by the explosion of migration, still surrounds the conception of pural society. A literature review covering many decades of scientific work is carried out here. One the one hand, it enables identification of what dinstingushes plural society from the close concept of multicultural democracy. On the other hand, it enables clearer insight into the dimension of conflict generation generally attributed to these spaces marked by a structuring cultural pluralism. ■