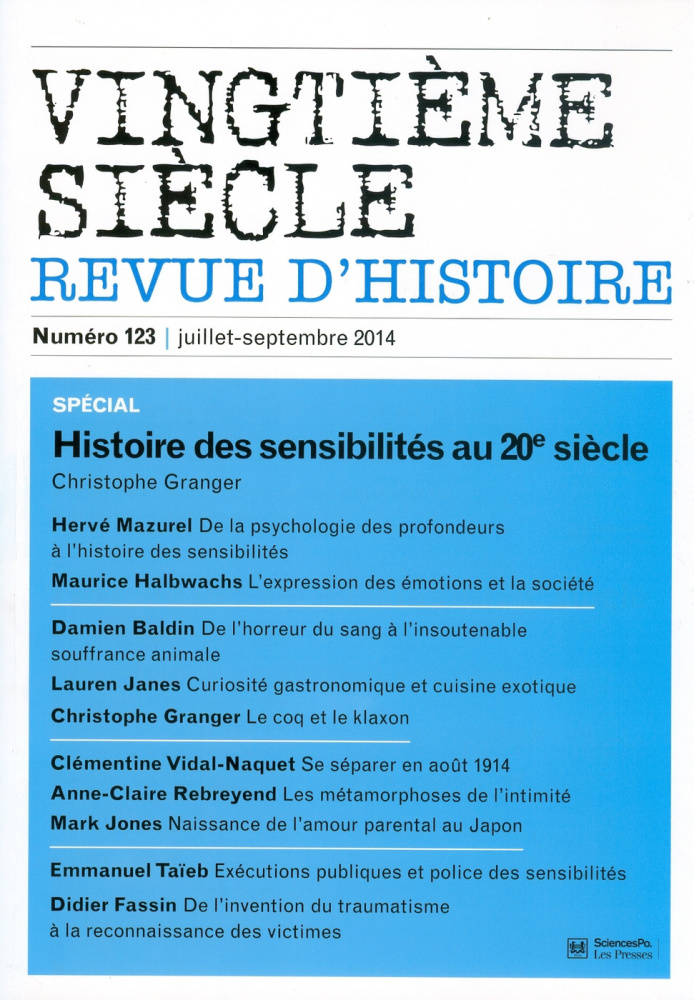 Table of contents: From Depth Psychology to a History of Sensibility - From Bloody Horror to Intolerable Animal Suffering - Gastronomic Curiosity and Exotic Cuisine in Interwar France - Honking and Crowing: France Discovers a New Noisy Existence - The Long Goodbye - The Metamorphosis of Intimacy - and more... Read More

From Depth Psychology to a History of Sensibility : An Intellectual Genealogy
Hervé Mazurel
The history of sensibility still continues to elicit suspicion, first and foremost because this intellectual project remains poorly defined, historiography often having led us to believe that its roots stemmed solely from Lucien Febvre's endeavours and the French history of mentalities. And yet in truth, the history of sensibility is nothing less than the historiographical translation of a much broader and older philosophical movement, born of the tipping point provoked by Karl Marx, Friedrich Nietzsche and Sigmund Freud. Those great sceptical thinkers taught us to unmask the role of desires, appetites and impulses behind our ideas, reason and consciousness. In addition to recreating the historicity of our lives of sensibility and thus rendering man less transparent to himself, the historian of sensibility aims to re-evaluate the role of affect in the shaping of human behaviours. To do so, we must reply on the rich constellation of critical knowledge developed in Germany during the first half of the 20th century, termed "social" or “historical” psychology, or, in a Nietzschean fashion, “depth psychology”.
Key words: history, psychology, sensitivity, historiography, epistemology.

From Bloody Horror to Intolerable Animal Suffering: Shaping Public Opinion With Regard to Animal Slaughter (19th-20th Centuries)
Damien Baldin
Starting in the 19th century, this article outlines the history of the killing of slaughterhouse animals, highlighting the two main emotions associated with this phenomenon: horror at the blood that was produced during animal slaughter, and a growing intolerance for animal suffering. During the 19th century, slaughterhouses slowly began to displace older killing methods and try to hide the runoff of blood in public spaces. Once this invisibility was obtained, during the following century authorities sought to implement a more humane form of slaughter that minimised animal suffering. Studying how these changes were implemented over time allows us to illustrate the historical construction of social and political tolerance levels with regard to animal slaughter, as well as the forms of public opinion that determined how these deaths were accepted.
Key words: history, slaughterhouse, animals, blood, suffering.

Gastronomic Curiosity and Exotic Cuisine in Interwar France: A History of Taste and Disgust
Lauren Janes
The frequency of colonial-themed recipes and gastronomic writing in the cooking magazines Le Pot-au-feu and Le Cordon bleu from the 1890s to the late 1930s reflect the French interest in exotic dining and colonized peoples. Despite their popularity, especially in the interwar period, the range of colonial-themed dishes was very limited, relying mostly on tropical fruits and curry powder and adding only an exotic touch to the periphery of French meals. These magazines also featured gastronomic curiosity pieces which exagerated the alterity of non-Western peoples, often through the trope of disgust. The portrayal of exotic others as the eaters of disgusting foods marked the boundaries of French cuisine and limited culinary exploration. The exoticsm found in these magazines further distanced the French from non-Western people, solidifying the cultural borders between colonizer and colonized within metropolitan France.
Key words: cuisine, exoticism, colony, disgust, interwar.

Honking and Crowing: France Discovers a New Noisy Existence (1945-1975)
Christophe Granger
Underpinned by a new drive towards well-being, the 1950s and 60s witnessed growing levels of intolerance with regard to the auditory stress of modern life. Although introduced twenty years earlier, this theme found new resonance during this period. Noise became a “social scourge”. Doctors began to investigate its negative effects on the body and helped to develop new medical guidelines and address public concerns. While silence once again became a sign of social distinction, and organisations were successful in erecting “noise control” as a worthy cause, public authorities likewise established a modern “right to silence”. Regulating noise standards, a ban on honking cars in city centres and expanded punitive damages in terms of noise pollution structured this historical endeavour to ensure peace and quiet for all. By shedding light on a particular facet of contemporary attitudes, this article hopes to more broadly analyse the mechanisms that govern shifting tolerance levels and the social logic of which they are the historical consequence.
Key words: sensitivity, noise landscape, modernity, medicine, social classes.

The Long Goodbye: Love and the Draft in August 1914
Clémentine Vidal-Naquet
In August 1914, the general draft brought about by the impending war marked an unprecedented phenomenon on the national scale. For couples, the beginning of the war first and foremost entailed separation, an eminently intimate experience, but also one which was widely shared on the collective level. This article hopes to examine and understand the decisive moment of conjugal parting in August 1914 through the way in which emotions were expressed. We will think about how conjugal tenderness on one hand, and the shedding of tears on the other, were narrativised to support mobilization, putting couples’ relationships at the heart of the event’s rhetoric. By studying the first letters exchanged after the departure of those who were drafted, we also hope to show the importance of the shared emotions and feelings that the separated couples were compelled to express due to their distance.
Key words: First World War, couples, mobilization, conjugal separation, history of emotions.

The Metamorphosis of Intimacy: Love, Adultery and Marriage (1945-1960)
Anne-Claire Rebreyend
Cécile and Étienne were lovers. She was a thirty-six year-old mother, married and living in Paris; he was ten years younger, single, living in the suburbs and lacking in sexual experience. Their vast correspondence, deposited with the Association pour l’autobiographie et le patrimoine autobiographique (APA, Association for Autobiography and Autobiographical Heritage), constitutes a documentary source of great value. Referencing the phenomenon of micro-history and relying upon discourse analysis, we shall attempt to follow the trajectory of Cécile and Étienne’s relationship between 1945 and 1960, focusing in particular on its beginnings from 1945 to 1949. Analysing an adulterous relationship from such an inside perspective will shed light on the metamorphosis of intimacy that occurred during the Baby Boom era, in particular with regard to male and female gender roles. By playing with contrasts, this unique story can also provide information regarding the representation of marriage during the post-war era – a period of time fraught with doubts concerning the conjugal institution. How did this adulterous couple challenge and circumvent conjugal norms, while simultaneously seeking to conform to them?
Key words: privacy, sexuality, letters, love, gender.

The Birth of Rational Parental Love in Early 20th Century Japan
Mark Jones
In Japan, between the 1890s and the 1920s, promoters of a new style of parenting proudly proclaimed an emotion, love, to be the family’s new guiding ethos. According to love’s advocates, emotion now needed to inform every moment of parental attention directed toward the child. Yet the birth of this new ideal of child-centered love was far from a simple or self-evident process. Parental love, like all emotions, is not a timeless feeling but a sentiment informed by particular historical circumstances. Japan’s early 20th century version of parental love was analytic and scientific, hardheaded and clinical, what was called at the time “rational love”. And it took much time and effort for its 20th century promoters to define the emotion, promote its necessity, and to realize its employment in the rearing of Japan’s children. This period of emotional reorientation birthed not only a new emotional style of parenting but also an “emotional community” of rationally loving mothers.
Key words: Japan, history, children, love, mother.

A Growing Intolerance: Public Executions and the Policing of Sentiments
Emmanuel Taïeb
By studying the disappearance of public executions during the Third Republic, this article hypothesizes that what may have at first seemed to belong to the physical realm was actually a means of questioning the social system. In order to analyse how the human body affected politics, as well as the particular punitive technology of physically eliminating criminals, we shall question the ways in which historically specific sensibilities were exploited. This essay explores how they were used and policed. This “policing” of emotions subtly played with what it was acceptable to feel when observing a guillotine execution, and ultimately prescribed the “right way” of viewing such spectacles. It was notably via these means that the bloody ritual of public execution gradually came to be seen as intolerable. Finally, this article shows that the changes that came about were less concerned with execution themselves than with how they were to be seen and experienced.
Key words: death penalty, political violence, sensibilities, policing, political spectacle.

From the Invention of Trauma to Victim Recognition: The Birth and Transformations of a Moral Condition
Didier Fassin
Starting with a dramatic event that occurred in the United States – the 2009 Fort Hood shooting – and the contradictory interpretations that were produced regarding the role of trauma in the massacre’s genesis, this essay reflects on the history of trauma and its political consequences. We shall first show how trauma transitioned from a clinical category with negative connotations to, at the end of the second half of the 20th century, the positive marker of a dramatic event whose psychological consequences attest to a victim’s healthy mental state. This remarkable moral transformation both permitted and legitimised victimhood. Secondly, using three different incidents – the fallout from the AZF factory explosion, the second Intifada and the evaluation of asylum applications, we shall analyse how trauma participates in a three-pronged policy of reparations, testimony and proof. In these processes, however, the way in which victims are recognised still remains unequal.
Key words: history, trauma, victim, psychiatry, mental health.