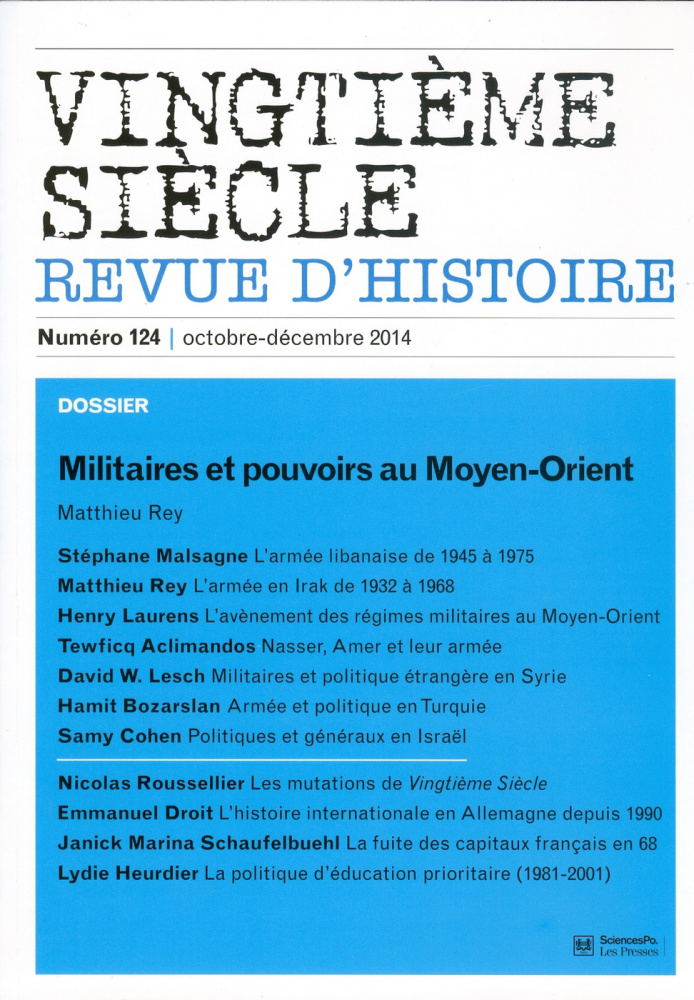 The Lebanese Army, 1945 to 1975: From National Jewel to Crumbling Institution

Stéphane Malsagne
A major player in Lebanon's post-colonial history, between 1945 and 1975 the Lebanese army experienced its foundational period as well as its first challenges in a troubled regional environment shaped by the Arab-Israeli wars. Created with the aim of embodying the unity and ideal of a hitherto unprecedented nation-state, the role of the Lebanese army was increasingly challenged at the end of the 1960s, however. The spread of divisions within the military hierarchy, criticism of the methods used by the army and the institution's inability to win unanimous support vis-à-vis its major internal and external crises are a number of the factors that weakened Lebanon, the country ultimately descending into "civil" war in 1975.

The Army in Iraq from 1932 to 1968: Between Arbitration and Control of Political Power
Matthieu Rey
This article presents a different chronological framework than the one traditionally put forth to understand the birth of the Iraqi army and the key role it played in building the Iraqi State. Between the country's formal independence in 1932 and the Baath party’s rise to power in 1968, the nation-building process and the rise of the army as a political tool were largely synonymous phenomena. This article retraces the evolving power dynamics and regime changes from a military perspective. Initially non-existent, the army then began to arbitrate between various factions, before ultimately gaining power itself. However, this stranglehold on power prompted its own collapse as a military tool and several groups of rival militias took its place.

The Birth of Military Regimes in the Middle East: Reinterpreting the "Age of Revolutions"
Henry Laurens
In an interview, Henry Laurens revisits the concept of "the Age of Revolutions" in the Middle East, which refers to a period stretching from the 1940s until the 1970s. He likewise emphasises the historiographical misunderstandings that occurred with regard to this topic. The military, viewed as the promoter of modernity, was supposed to ensure reforms that would prevent these States from tipping over into Communism. In fact, however, the governmental systems implemented often resembled police states (mukbabarat) in which intelligence services played a key role. If these governments can be seen as revolutionary, it is only in so far as they aimed to effect social transformation.

Nasser, Amer and Their Army
Tewficq Aclimandos
In 1952, Gamal Abd al-Nasser seized power with the support of the Free Officers Movement. This coup took place whilst the Egyptian army was being established. The new regime, both authoritarian and military, had to control the officers from which it had emerged, but also had to provide the country with an effective military tool. These two endeavours intricately linked the state and the army together, thus defining the specific features of Nasser’s regime. Very early on, this regime took the form of a polyarchy, wherein two main powers became increasingly powerful. It was only after the 1967 war that this aspect was transformed. This article examines in detail how the regime and the country’s defence system was created.

Foreign Policy and the Military in Syria (1946-1970): From Independence to Dictatorship
David W. Lesch
Perhaps more than in any other country in the Middle East, Syria’s domestic and foreign policies are strongly interconnected. This unique trait can explain the army’s rise to power as well as the Baath party’s triumph over other political factions. This article sheds light on how a group of officers identified themselves with the Baath party, in turn using it to take possession of the State.

Politics and the Army in Turkey (1908-1980)
Hamit Bozarslan
Spanning the period from the Young Turk Revolution in 1908 to the 1980 coup d’État, this article puts forth the hypothesis that although the army had important means of coercion and action at its disposal, thus granting it a supra-social status, it often lacked internal cohesion. Its interventions, both direct and indirect, were reactions to crises, which they often exacerbated but did not always control. Although there is no doubt that the army possessed an “esprit de corps”, a common nationalist and Kemalist ideology, as well as a minimum of organic unity, it nevertheless did not manage to derive its legitimacy from an exclusive supra-social position. Consequently, it had to interact with State and civil society actors. Its technology of power was designed according to the interests and expectations of the officers who wielded it, the constraints and opportunities they faced, as well as the subjective perceptions that they had regarding various political problems.

Politicians and Generals in Israel during the 20th and 21st Centuries
Samy Cohen
Although for the first two decades following the establishment of the State of Israel, consensus reigned regarding Tzahal, or the Israeli Defence Forces, today this institution is no longer exempt from public criticism. Its image as the “army of the nation”, a melting pot for generations of immigrants, still flourishes. But this image now only reflects part of the reality and a number of transformations have been accompanied by questions and doubts: What is the weight of the role played by religious soldiers? Are the generals becoming a threat for Israeli democracy? Is it the State which “possesses an army”, or the army which “possesses a State”?