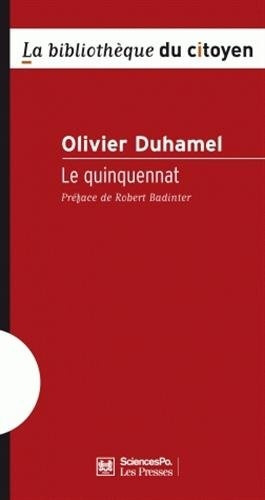 Reducing the length of the presidential term from seven to five years—what could be simpler? A new number, a single word changed in the constitution. Thanks to the oft expressed will of French citizens, the president's reign is shorter. The people have been heard.

Except for those who object; to them a half-decade term changes the very nature of French institutions. The majority of those who hold this opinion emphasize that it presidentializes the Fifth Republic. Others base their refusal on exactly the opposite view, that the new term limit reinforces the weight of the parties, threatening a regime of the assembly. The matter becomes complicated.

A third view emerges: that the five year term inevitably drives France toward an American style presidential regime. Such a chain of events is dreaded by conservatives, but the hope of progressives. The fog thickens.

What are we to think of these different positions? Is the five year term a good or a bad thing? What does it really change? These are the sort of questions French citizens pose. This new edition responds to them, both by examining the confrontation between the Fifth Republic and the great democracies encircling it, and by looking at more current debates.

Olivier Duhamel, Professor at the Sciences Po Universities, Director of the review Pouvoirs, and Reviewer at France-Culture and LCI, has participated in the Vedel (1993) and Balladur (2007) commissions on the revision of the constitution.