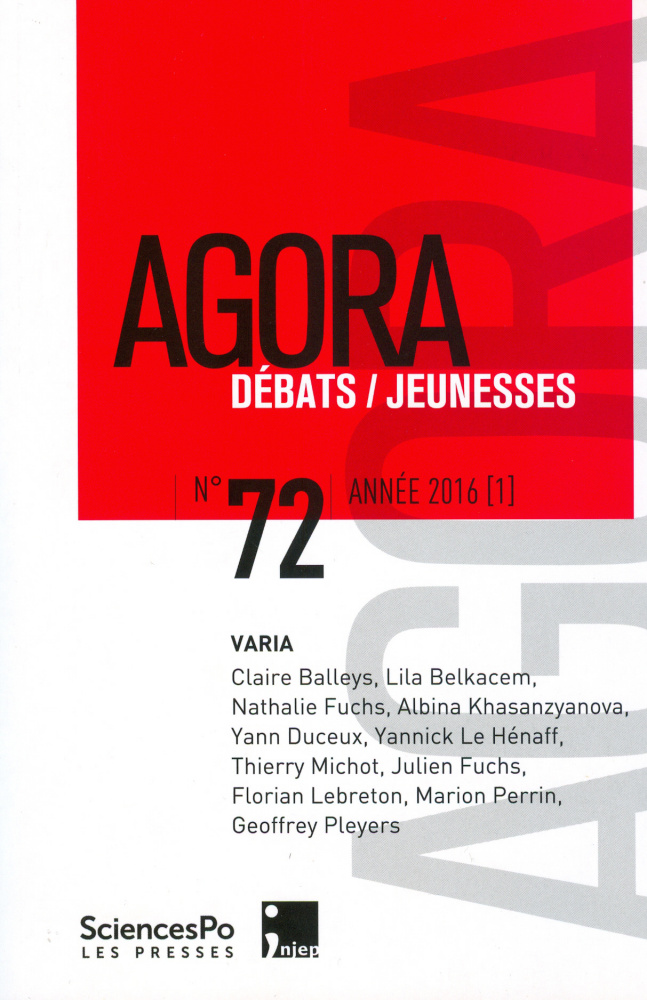 Table of contents: Management of intimacy and the display of emotional territory - The "Des racines pour ton avenir" [Roots for your future] camp - The frontiers of collective identity in militancy on suburban housing estates - etc. Read More

This article problematises the management and valuing of intimacy between teenagers on the social network websites, in relation to the acquisition of social prestige. Teenagers' characterisation of social, amicable or love bonds depends on the degree of intimacy shared with the people they have "chosen". From the results of an online ethnographic survey, the author shows the correlation that exists between the notions of intimacy and of exclusivity in the process of negotiating the social bond between teenagers. The question of gender socialization with respect to intimacy management is also analysed on the basis of the findings.

Organised by migrants living in the Paris area today, the aim of a stay in “Des racines pour ton avenir” is to make “the country” and “the family” known to teenagers of Malian origin who have grown up in France. In this process, it crystallises the social positions and ethnic-racial attributions of the participants. Simultaneously, it leads to their requalification and disqualification, linked to the image of “young people from suburbs in trouble”. The gaps between their experience and the educational aims of the organisers are seen here to be significant.

The frontiers of collective identity in militancy on suburban housing estates

The objective of this article is to show the process of identity construction that structures the militancy among descendants of North African migrants from the suburban housing estates, committed to three highly different organisations in the years 1990 and 2000 in the Paris region. It questions the relationships and interactions mobilised in this field of militancy with the aim of constructing a “we”. This questioning leads us to consider the evolution in the social and symbolic mechanisms of identification modes, the complexity of personal, collective and social identities, and the heterogeneity of the characteristics and social affiliation of this population.

Within the framework of their activity in associations, voluntary workers receive informal training. Considered to be invisible, this training raises the question of how it can be traced and identified in order to be reported and recognised. This article attempts to grasp volunteers’ experience via a description of the skills associated with the learning they think they have acquired in the course of their activity with associations. Study results show that young volunteers are well aware of the learning they develop and that the associative context enables them to construct their own experience in the field autonomously.

Learning to “manage” consumption: a biographical approach to alcohol abuse among students

Works on alcohol consumption by the young are abundant. Such usage is often presented in relation to the absence of rules or recognition of danger. Through these analyses, the author shows how, in a state of alcohol abuse, the people he surveyed take care to control their consumption, according to their own methods, and seek to avoid the deliberate, irresponsible risk-taking they are accused of. Thus he makes the hypothesis that, on the contrary, beneath this alcohol abuse, even when it is serious and gives the appearance of a refusal to accept norms, there lies a concern for management of oneself, of one’s peers and of the consumption context.

Observations on the effects of the university course followed

“It makes me laugh to see such a poll for STAPS [Science and techniques of physical and sports activities] students who spend their time getting drunk.” This opinion, expressed in response to a questionnaire on the link between study courses, the practice of sports and alcohol consumption, is a caricature of how students, male and female, are represented. From a survey on students following three different courses in Brest university (STAPS, science and technology, law/economics/ management),

Care in the changing rooms!

Gender, the teaching of decisionmaking and the ethics of care in holiday camps

How does a group marked by ideals of sport and virility at the start of a summer camp come to take on activities and attitudes traditionally vested in women, and notably, favour relationships and attention to others rather than competition and the football field? In the summer camp studied, working on the basis of decision teaching, the author suggests that the camp council – a group decision-making body – is an ideal situation for shifting from virile logics to care ethics, i.e. ethics of relationship and responsibility.

Commitment and relation to the self among young anti-globalisation activists

Many young people mobilised in movements for more democracy or environmental transition redeploy a militant anti-globalist culture that places the relation to the self at the heart of their commitment. This article shows that they base the meaning of their action on the construction of the self as subject and on the coherence between their values and practices, far more than on militant organisations, manifestoes, or the impact of their action on society. It also emphasises that while young people’s commitment and today’s movements cannot be understood without granting due importance to the subjectification process, the latter does not necessarily tend to reinforce the capacity for action and for becoming a player in society.