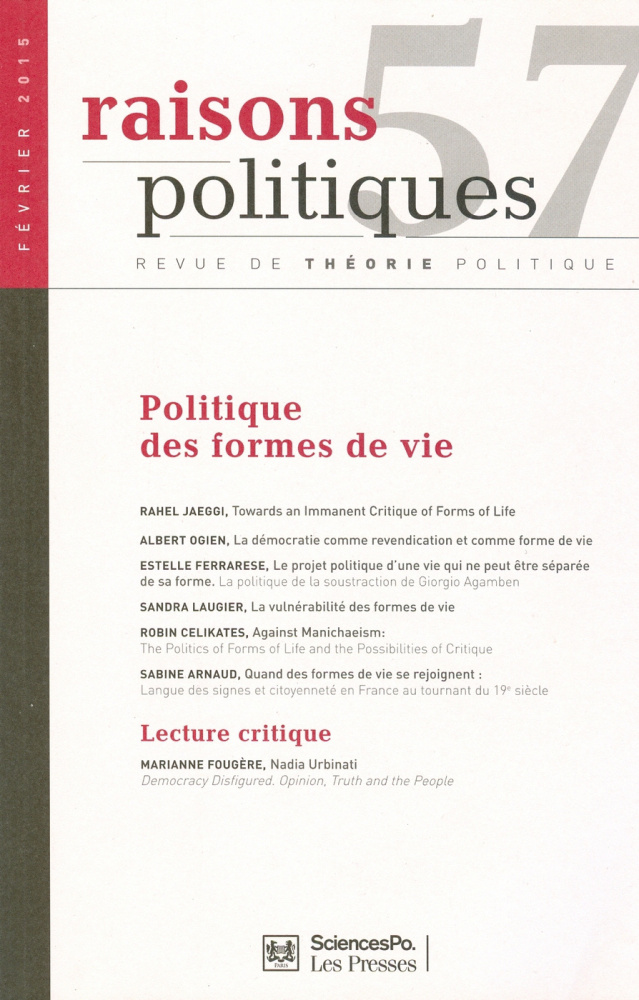 Table of contents: Towards an Immanent Critique of Forms of Life-Democracy as claim and as form of life-The political project of a life which can not be separated from its form-The vulnerability of forms of life-Against Manichaeism: The Politics of Forms of Life and the Possibilities of Critique-When Forms of Life Meet Read More

Towards an Immanent Critique of Forms of Life

Is a critique of forms of life possible? Does it make sense to say that forms of life are good, successful or even rational? While philosophy has given up on the Socratic question of "how we ought to live" [actually we say the “good life” when talking Plato in English, but I think Jaeggi says “how we ought to live” in her article, right?], the political order of the liberal constitutional state presents itself as a way of organizing a coexistence that is ethically neutral towards different forms of life. The way we ought to lead our lives is relegated to the private sphere, treated as mere preferences that cannot be questioned. In this paper, the author proposes a way in which we can viably criticize forms of life by means of a social, immanent critique that overcomes the constraining distinctions between ethics and morality, the good life and moral principles, or the right and the good. This approach first requires an exposition of what forms of life are, how they work, and how their ontology renders them amenable to immanent critique. For this critique to have more than merely arbitrary normative force, the author goes on to show that its reasons and standards can be found in the very structure of forms of life, once they are understood as historically situated problem-solving processes. Thus, forms of life interact with their critique through a dynamic that ultimately yields immanent and emancipatory critique.

Democracy as claim and as form of life

An original form of political action has appeared in democratic regimes which takes place outside of the established channels of the representative system while claiming an extension of democracy. This article proposes to account for this phenomenon by showing how democracy can be conceived as a “form of life” – by reference to Wittgenstein's definition. It then shows the proximity of this notion with that of “situation” devised by Goffman. Finally, relying on Dewey’s theses about inquiry, the article describes the practical content of democracy as form of life – aiming it promoting the autonomy of citizens and warranting pluralism of ways of living and thinking. The analysis reminds that in every State society, democracy achievement is a ceaseless process relying on the constant interweaving of two modes of conceptualization of democracy: as a system of representation and as form of life.

The political project of a life which can not be separated from its form. Agamben’s politics of substraction

This paper analyses Giorgio Agamben’s critical position, inasmuch it is based on the idea of bare life. It shows that the critique that the opposite concept of form-of-life enables, and the kind of politics it calls for, are nullified by the fluctuating definition of the phrase “form-of-life”. By studying two symmetric but reversed figures of his work (the refugee and the Franciscan, both de-subjected from the sovereign), I also reveal that subtraction is the political action par excellence for Agamben, and that life, which is the fundamental tool of his critique of sovereignty, strangely disappears as such from his project of political community.

The vulnerability of forms of life

This paper is meant to strengthen the connection between the ethics of care and ordinary language philosophy, as represented by Wittgenstein, Austin, Cavell, and thus to find some resources in OLP and the idea of the Ordinary for a reformulation of what is at stake in the present discussions on vulnerability. The point of the paper is to show the relevance of OLP for ethical and political issues. This exploration of the (theoretical and practical) question of the ordinary is anchored in the “rough ground” of the uses and practices of language; it leads to further investigating the concept of forms of life.

Against Manichaeism: The Politics of Forms of Life and the Possibilities of Critique

Forms of life are often understood to be pre-reflexively “given” and thus immune to critique and reflexivity. In this paper I first show how this problematic view arises from a one-sided reading of Wittgenstein. I then go on to argue that a similar view also informs Bourdieu’s conception of a critical social science. Building on the pragmatist sociology of critique, I argue against such “Manichaean” visions that contrast the “inside” characterized by unreflective immersion with the “outside” perspective of the theorist-observer, instead emphasizing the essentially heterogeneous, reflexive and conflictual character of forms of life. Against this background, a much broader view of the possibilities of critique and an alternative– non-conventionalist and non-conservative–understanding of the politics of forms of life emerges.

When Forms of Life Meet: Sign Language and Citizenship in France at the Turn of the Nineteenth Century

This article uses the notion of forms of life to examine the role assigned to language – spoken or signed – in the legal rights and empowerment of “deaf-mute” people in France at the turn of the nineteenth century. It sets out three case studies: the trial and acquittal of a deaf-mute pupil, an allegation made by a deaf-mute pupil, and a petition submitted by a deaf-mute teacher regarding the legal rights accorded to deaf-mute people by the Napoleonic Civic Code. A close reading of the material reveals the role of three linguistic functions – performative acts, grammatical construction, definition – in ascertaining a shared experience and understanding of language, that is, a common form of life. Attesting common access to and expectations of language, these functions were strategic in establishing “deaf-mute” people’s membership of society, their understanding of their duties as citizens, and the need to grant them full civil rights. I use the concept of forms of life to pinpoint the political dimension of linguistic expectations and the possibilities that may arise when these expectations are fulfilled.

Towards an Immanent Critique of Forms of Life
Rahel Jaeggi

Against Manichaeism: The Politics of Forms of Life and the Possibilities of Critique
Robin Celikates