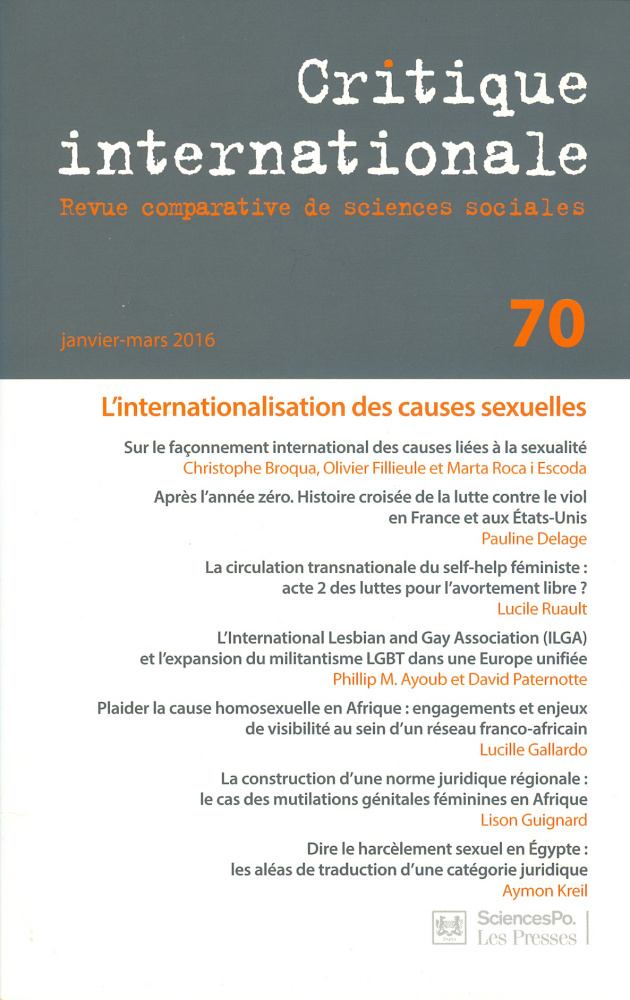 The articles of the dossier analyze the process of internationalization of mobilizations related to sexuality in Europe, North America and Africa. The variety of geographical and cultural contexts captures the struggles that develop around the globalization phenomenon of sexuality. Read More

After Year Zero. Contrasted Histories of the Struggles against Rape in France and in the United-States

By contrasting the histories of the feminist problematization of rape in France and in the United States, this article highlights the political transfers that shaped this cause in the 1970s'. Common ideas and practices converge in constructing a similar analysis of the phenomenon of sexual violence. On the contrary, some ideas and practices do not travel from one context to another. If the issue of race is often at stake when the American context is mentioned in France, it is dealt with differently in both countries. Moreover, rape crisis centers became a foremost device in the struggle against rape in the United States, whereas no equivalent has appeared in France. Analyzing the convergent and divergent dynamics in the constitution of this cause, the circulations as well as filters which impede exchanges, draws attention to the conditions of diffusion and reception which anchor ideas and practices in a specific context.

The Transnational Circulation of Feminist Self-Help: The Second Act in the Fight for Free Abortion?

In 1970s France, the field of medicine appropriated methods of abortion and contraception. As this happened, heterodox knowledge concerning the body and gynecology that had originated in the feminist self-help movement of the United States and was critical of institutionalized medicine made its way to the country. By examining the manner in which self-help approaches were received and adapted by minority factions within the Mouvement pour la liberté de l'avortement et de la contraception (MLAC), the present article sheds light on the conditions of the transnational diffusion of these practices and rhetorics. More particularly, it reveals the limited but stimulating efforts of MLAC groups to transplant them. The acquisition of recognized counter-expertise in a transnational activist space in its turn re-energized the MLAC and legitimated their skills within activist networks at the (trans) local and national levels.

Europe constitutes a propitious region for transnational activism and the LGBT movement, in particular. A certain idea of Europe, associated with tolerance and democratic values, has thus been used by activists to defend their rights, particularly against what are considered hostile states. According to these activists, LGBT rights are not only human rights but, given its normative dimension, also part and parcel of the European project. This conception of the European project has influenced activist strategies and action in the region. The work of activists, in its turn, has provided grassroots support for the European construction project. The present article focuses in particular on the International Lesbian and Gay Association (ILGA) and its European branch, ILGA-Europe, and the spread of LGBT activism to Central and Eastern European countries (CEEC).

Advocating the Homosexual Cause in Africa: Engagement and Issues of Visibility within a Franco-African Network

Since the 1990s, the term "advocacy" has been widely adopted in the third sector to describe actions undertaken to promote causes and legitimate protest models. Despite differences among national and local situations, the global diffusion of these models has led to the emergence of non-governmental transnational coalitions that work to advance homogenized causes. Yet the notion of advocacy and the actions with which it is associated are multiple and heterogeneous in nature, as are the manner in which causes are formulated and the groups and individuals engaged in them. In order to examine the concrete conditions under which what are known as advocacy actions are produced, the present article considers the case of a network of Franco-African associations, Africagay against AIDS. It seeks to determine what advocacy consists of in this case, how the network's transnational action is constructed and the nature of its aims and national determinants. I contend that the raison d'être of Africagay against AIDS has as much to do with the dominant role played by the French association AIDES and the spread of its activities in Africa as it does with a collective desire to champion the "homosexual cause" in the international activist arena involved in this struggle.

The Construction of a Regional Legal Norm: The Case of Female Genital Mutilation in Africa

How and why did the African Union in 2003 adopt a legal norm seeking to prohibit female genital mutilation (FGM) even though the practice was still a matter of controversy in the states concerned, where the fight against the practice was sometimes perceived as a "Western" cause? This article focuses on the actors and the arguments they employed in their efforts to produce this regional legal norm. It argues that the adoption of the Maputo protocol is to be explained as the result of the mobilization of a "regional advocacy network" endowed with its own legal competencies rather than in terms of a desire to conform to international requirements. Consisting of various types of organization united by common interests in the domain, this coalition acted as a "go-between", translating the norm at the regional level. The approach adopted here seeks to restore regional scale analysis to research into the production, diffusion and circulation of transnational norms in the area of human rights.

Finding Words for Sexual Harassment in Egypt: The Vicissitudes of Translation of a Legal Category

Since the Beijing conference on women's rights in 1995, the expression “taharrush jinsi” has gradually become the standard way of translating “sexual harassment” in Egypt. By studying the circulation of this notion, one may sketch the manner in which it has since the mid-2000s been constructed as a matter of public concern at the national level. In fact, it represents a strategic resource for women’s rights associations, which seek to establish taharush jinsi as the only legitimate problematic for addressing the issue of women’s security when circulating in public. Yet its growing popularity has exposed the expression to contradictory re-appropriations, particularly on the part of defenders of religious categories, who favor the vocabulary of modesty. Divergent security approaches might prove decisive for how the problematic is perceived in various quarters, thereby raising the question of the potential and limits of introducing legal categories as a strategy for mobilizations centered on sexual causes.

When the Judges Get Involved. The Role of the Courts in the Demobilization of Paramilitary Groups in Columbia

The negotiations that began in 2013 between the Columbian government and the country’s paramilitary groups in the aim of securing the latter’s demobilization profoundly transformed the relationship of legal institutions to organized violence. Indeed, the negotiations and subsequent process of demobilization were marked by a reaffirmation on the part of the country’s most eminent judges of their prerogatives in dealing with armed groups. More broadly, the legal system positioned itself as an indispensable body for describing violence and determining responsibility for abuses that took place during the armed conflict. While there were strong pressures in favor of a solution that would have favored stabilizing the political situation, the judges opted for revelation in order to shed light on the collusions underlying paramilitary violence. This process must be understood in the context of the redefinition of the role of the legal system, reflecting a longer-term trend towards the judicialization of politics.

Just a Matter of Words? The Construction of a Self-Legitimation Discourse by Private Security Companies

Focusing on the case of internationally active private security companies, the present article examines the role of discourse in processes of legitimation. Long decried as mercenaries, these companies are today widely used and recognized as specialized, private and regulated businesses. Endowed with this newly acquired identity, they now seem to be legitimate actors. It is therefore worth considering the forms that this process of legitimation has taken by comparing the discourse produced by the security companies themselves with the manner in which they are discussed in other arenas. This side-by-side comparison reveals the constraints that operate on the production of a discourse in the area of private security and, above all, allows one to assess the conditions of its authority. For imposing a discourse – and an identity – in a domain considered as falling under the competence of the state cannot be reduced to a process of self-definition.

Origin as Resource: Affirmative Action in the Argentinian University

In 2003, Mendoza’s National University of Cuyo offered a scholarship program that, in contrast to similar programs elsewhere in higher education, employed original selection criteria. The program was offered, not only to Indians (specifically, the Huarpe people), but also to their neighbors in the same villages, like them graduates of rural high schools far removed from urban centers. In addition to special financial and academic support and career counselling services, the University also offered to “accompany” these young people in the cultural transition from country to city. How did origin become a resource for institutional actors in conceiving and implementing this affirmative action program? Instead of contrasting ethno-racial and territorial criteria, it presents itself as a measure of “origin-based orientation” targeting both Indians and their rural neighbors. Alongside a bibliography in Castilian, Portuguese, French and English, this article draws on a study conducted in Mendoza, where various sources were consulted, including audiovisual recordings, field observations, interviews and university documents.