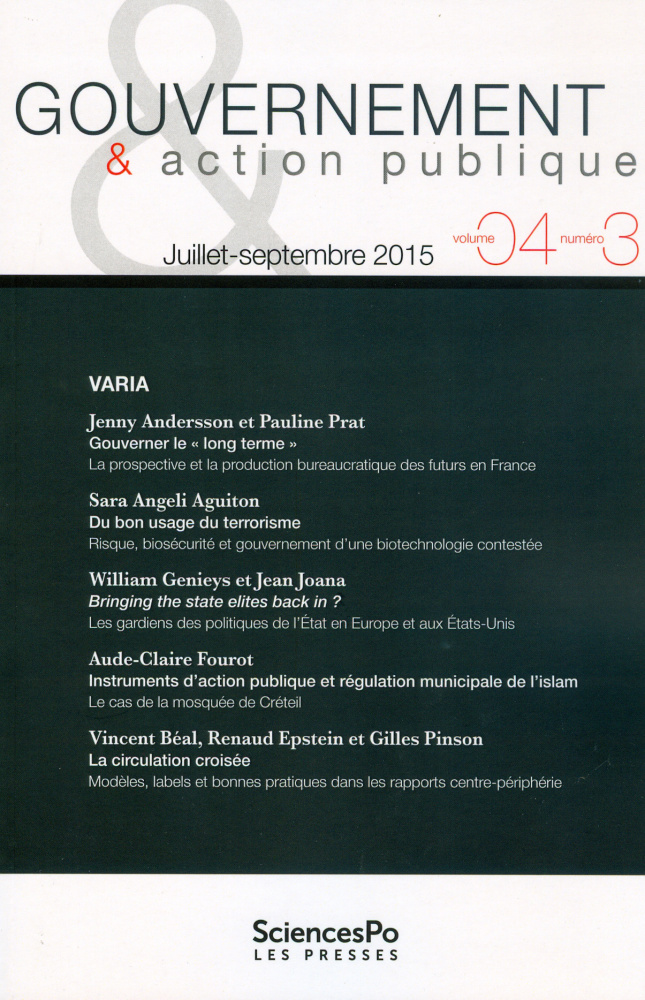 Table of contents: Governing the "Long-Term" – On the Good Use of Terrorism – Bringing the State Elites Back? – Instruments of Public Action & Municipal Regulation of Islam - Crossed Circulation: Models, Awards and Best Practices in Central-Local Relationships. Read More

GOVERNING THE "LONG-TERM". PROSPECTIVE AND THE BUREAUCRATIC PRODUCTION OF FUTURES IN FRANCE

Abstract: This article examines French strategic foresight, as a way of understanding how contemporary states make use of forms of knowledge and expertise in order to govern. Relying on a series of quantitative and qualitative instruments, from indicators to scenarios, prospective emerged in the 1960s as a particular form of state expertise aiming at ordering social change. In doing so, it carried mainly American conceptions of decision science into the French planning apparatus. This article examines the genesis of the "long-term" as a category of action, and as question of bureaucratic future production in the French state. It examines the changing role of prospective from the preoccupation with societal discontinuity and social crisis in the wake of 1968, to the more recent concern with strategic planning. It argues that the strategic state understands change as directly related to its own agency, and governing the long term thus implies governing and managing the state itself.

ON THE GOOD USE OF TERRORISM. RISK, BIOSECURITY AND THE GOVERNMENT OF A CONTESTED BIOTECHNOLOGY

Abstract: Since 2001, biological threats have become a growing preoccupation for terrorism prevention services in the US administration. This concern met the trajectory of synthetic biology, an emerging field of biotechnology which aims to create organisms that do not exist in nature. Gene synthesis, a core industrial sector for synthetic biology's promises, rapidly raised series of debates concerning the government of science, market and national security. By retracing these conflicts, also fueled by environmental critics against synthetic biology's agenda, the paper shows that the bioterrorist risk contributed to legitimate a contested biotechnology. Displaced from synthetic biology’s techniques and projects, the risk got progressively attached to the “misuses” of gene synthesis ; allowing the making of a compromise between a national security regulation of behaviors for the sake of US biosecurity and a liberal regulation of biological commodities for the sake of US economy.

BRINGING THE STATE ELITES BACK IN? THE CUSTODIANS OF STATE POLICIES IN EUROPE AND IN UNITED STATES

Abstract: The liberalization of public policies has now been a dominant theme of political science for thirty years. In this perspective, much work has evoked the dismantling of the state to which it is purported to lead. This article seeks to nuance this idea by putting forward the prospect that liberalization since the 1980s has been accompanied by the emergence of a new type of state elite, which we qualify as the custodians of state policies. Through analysis of the transformations of two sectors of public policy, health and national defense in Europe and the USA, we show that the distinctive feature of this elite lies not only in its engagement in favor of policy but more importantly in the career trajectories of the individuals who comprise it, characterized by their personal identification with the state’s capacity for action within their evolving policy sectors. Taking this into account allows us to gain a new perspective on the distinction between strong and weak states, central to understanding the sociology of the state.

THE GREAT MOSQUE OF CRÉTEIL

Abstract: In France, municipalities enjoy an important room for manoeuvre regarding the regulation of Islam. In this sense, the case of Créteil is particularly intriguing. The city’s mosque is notable, not only for the speed with which it was built, but also for its central location and visibility. In addition to the political will of Créteil’s mayor, local actors often put forward the project’s consultation process as a main factor explaining this success. But is that really the case? Why did the municipality choose to publicize this project and what are its effects? In considering the consultation process as a public action instrument, this article analyzes three types of effects it can have on public action. More than an instrument of democratisation or an effective implementation tool, the consultation process defines specific Islam’s forms of representation at the municipal level.

Abstract: This article focuses on the circulation of urban policy models and “best practices” and its influence on the reshaping of relationships between States and local governments. It suggests that the increasing mobility of practices, knowledge and initiatives in urban policies can not only be explained by the horizontal and transnational dynamics of urban policy-making. It relies also on the restructuring of the State the ways in which its policies are formulated and implemented at the local levels. By considering the National Programme for Urban Renewal and the Sustainable City Plan, the article highlights the emergence of a new model of central-local relationships based on the State’ tracking of local “innovative” or “exemplary” initiatives, and on their certification and diffusion. This model of crossed circulation allows the State to strengthen its capacity to mobilize and steer at a distance urban policies, without actually challenging the rise in power of cities.