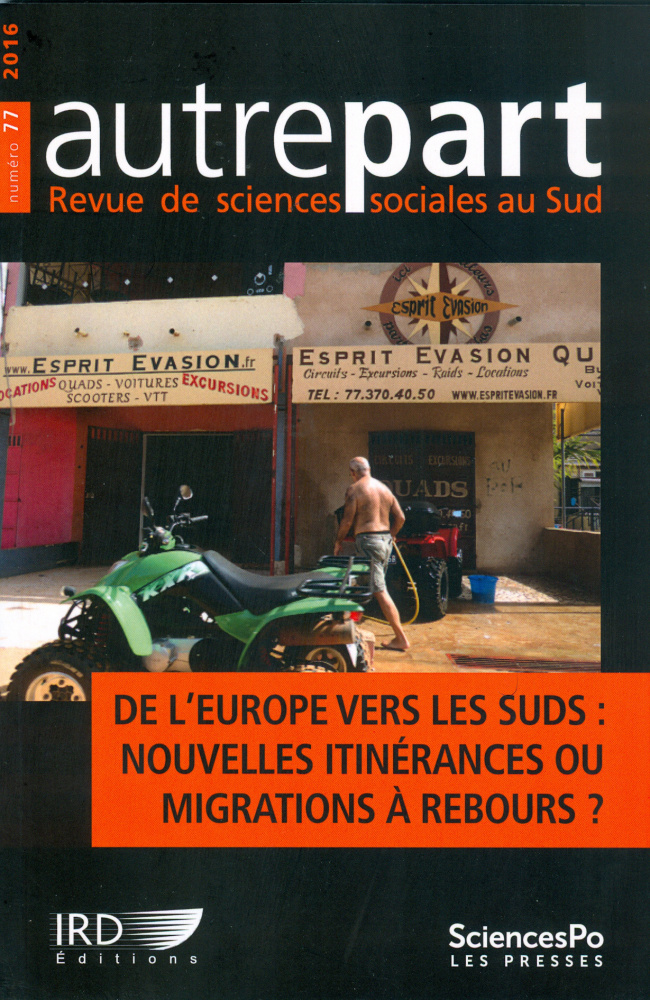 Giulia FABBIANO, "Expats", "settlers", and “pioneers”: contemporary mobilities, social worlds, and the postcolonial dynamics of the French in Algeria

Once a settlement colony, Algeria had the largest European population of any North African country during the nineteenth and twentieth centuries. While attention has been paid to the colonial flow of populations, scholars have largely neglected postcolonial dynamics, despite the fact that, since 2000, the end of the civil war and new liberal economic trends have ushered in a new era of mobility between Europe and Algeria. This paper focuses on migration from France, and highlights its social and postcolonial dimensions. Secondly, it explores the narratives and practices of French migration to Algeria while paying attention to the social relationships that are formed in a local context. Thirdly, through a review of the current typology of North-South movements, it presents a new cartography of migration by revealing a spectrum of permeable “social worlds”.

After a period of instability, Algeria has experienced strong economic growth since the beginning of the 2000s. Spain, after a long period of prosperity, is suffering the effects of the economic crisis, which began in 2009 and has sunk important sectors of the economy, thus pushing up the unemployment rate. Since then, there has been a significant increase in Spanish emigration. As was the case a century earlier, the combination of social and economic precariousness in Spain and job opportunities in Algeria increased the mobility and presence of Spaniards in Algeria. Actors concerned by this phenomenon are companies and workers from several production sectors, primarily construction and public works. Working and living in Algeria has attractive benefits for Spaniards as a result of the geographical proximity of the two countries; however this goes hand in hand with some administrative difficulties and a certain degree of insecurity in the Algerian economic and legal system.

Studying European winter migrants in Morocco represents a fresh approach to the field of Mediterranean migration, and challenges the conventional categories used to analyse mobility. Winter migrants – who are mostly French, retired, and in couples – stay in Morocco in fixed accommodation or recreational vehicles (camper vans, etc.). This type of mobility shapes the ongoing circulation between Europe and Morocco. In this article, I aim to delimit the spatio-temporal dimensions of such a circulation, and explore how they impact the organisation of multi-sited social spaces at the macro level. Drawing on a survey conducted in Agadir, the article identifies the socio-demographic profiles of the winter migrants and the role mobility plays in their life. It then details and nuances the bipolar and seasonal aspects of the migratory winter circulation model. Eventually, the identification of transnational social and symbolic links between Europe and Morocco enables an understanding of how the multi-sited social spaces associated with these movements are constituted.

This paper focuses on French migration towards Morocco. The “expats” – posted in the country by their State or company, living at a distance from the local society and benefiting from institutionally guaranteed socioeconomic privileges – have made way for the “migrants” coming from the weakened middle classes in France and negotiating the conditions of their mobility themselves, without any institutional or economic mediator. This article describes the trajectories of these migrants, the circumstances that prompt their move, and the conditions within which it takes place. It highlights the informal conditions which characterise their experiences in Morocco, and their position within a transnational space-time.

Mohamed BERRIANE, M'hammed IDRISSI JANATI, The European residents of the Medina of Fez: a new form of North-South migration

Long considered as a sending country for migratory flows, Morocco is becoming a receiving country and a crossroad for flows originating from the North as well as the South. The regional metropolis of Fez was in the past an important commercial center connecting West Africa, the Arab Orient, and the north of the Mediterranean coast. Today, Fez is an important hub for North-South circulation, and the destination of recent migrants of European origin aiming to experience the city as they imagine it, and to develop economic projects. These migratory flows have rapidly evolved and diversified. Whilst tracking how the settlement of Europeans in Fez has changed over time, this article also compares the insights from forty interviews with the model research described by on lifestyle migration. The article analyzes the numerous motivations of this particular type of migrant and their various migration situations, and attempts to understand how they recreate their identity. It concludes with some lessons that can be drawn from this phenomenon, for a better understanding of the Moroccan migratory system in general.

Frédérique LOUVEAU, European migrants in Senegal's Saint-Louis: heterogeneous strategies to negotiate their place in the city

This article focuses on the ways in which European migrants who have settled in the city of Saint-Louis in Senegal use resources of culture and heritage to construct their lifestyle. Social diversity creates a universe in which retired people invest in tourism with a romanticism based on nostalgia for colonial outposts, whereas young people want to erase references to the past. They all seek to be agents of development on their own terms. The former indulge their creative passions by organizing events in the city to attract tourists and by educating the local population in heritage conservation, while the latter consume these activities in the company of the Senegalese, believing that development depends on egalitarian relationships.

This paper analyses the mobilities of residential tourism (and its associated professional migrations) from Europe towards two coastal regions of Senegal. Such mobilities are partly a response to the economic crisis which professional and retired people face in Europe. Residential and entrepreneurial mobilities breathe new life into tourism dynamics at both local and international scale and they encourage the economic openness of the Petite Côte and Saloum regions. However, the activities in question rely on networks of sociability based on mechanisms of social distinction. Processes of ethnic and racial segregation are effectively based on unequal socioeconomic status between European and Senegalese residents. European migrants therefore tend to withdraw into their own social group, creating a fragile and ambivalent world, which persists because of its constant renewal.

Celio SIERRA-PAYCHA, The dynamics of Spanish- Colombian migration during the crisis: multiple migrations or return migration?

The Spanish-Colombian migration system experienced an exponential increase in the migration flow from Colombia towards Spain between 1996 and 2006. The years 2007 and 2008 correspond to a transition period during which the economic situation of the two migration hubs switched. Whereas Spain was coming out of its most prosperous period since the end of the Franco era and entering a phase of economic recession with an unemployment crisis, Colombia was slowly recovering from the economic downturn it went through in the late 1990s. This situation might have gestured towards a potential inversion of the migration flows between Colombia and Spain. The study presented here, based on micro-data concerning residential changes taken from Spanish population registers, confirms that more Colombians left Spain than migrated to Spain. It nevertheless shows that the current trent is towards bifurcation within Spanish-Colombian migration, meaning that more and more Colombians emigrate a second time towards a third country (United Kingdom, Germany, France, United States, Venezuela) instead of returning to Colombia. The diversity of Colombians’ migration routes and their various migration strategies should be analyzed in terms of migrants’ social resources.

Return migration as a consequence of the economic crisis in the Northern countries have stirred intense political and academic interest. Spain is a promising vantage point for analyzing the methodological and political issues at stake in the notion of “return” migration, since its migratory flows have reversed since 2011. Drawing on a review of the recent literature on return migrations from Spain, this article provides an insight into a phenomenon considered as exemplary of the complexity and reactivity of today’s migration flows. It explores three angles: the extent of return migration and the obstacles to its statistical measurement; the public policies and the political management of the migration flows by both origin and destination states; and the stratifications of class, gender and migratory status that shape migrants’ strategies.