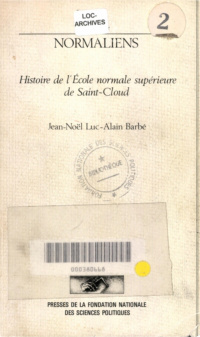 Training a popular élite while preventing it from acquiring the officiai culture so as to curb its upward mobility : for a long time this was the effective rôle of the Ecole Normale Supérieure de Saint-Cloud, set up at the top of primary éducation by the Third Republic. Separated from the mainstream of éducation whose rôle was to renew the bourgeois élites, the Ecole Normale received the best of the student teachers to form a teaching corps which would provide for the éducation of the people. Transformed at the end of the Second World War into an Ecole Normale for secondary éducation, it was theoretically limited to the préparation for the CAPES (sélective exam for secondary-level teachers) and maintained its clientèle from humble social origins. Due to a winning strategy, aided by the great increase in school population, it became an efficient center for the préparation of the agrégation (higher sélective exam for secondary-level teachers) and for the entry into university careers. When its curriculum, its préparation and its objectives were aligned with those of the Rue-d'Ulm, the privileged classes took over. This book with its overall view contributes to the understanding of the ideology and the functioning of the "primary order " set up by opportunist Republicans as well as the difficulties of unifying the educational System bequeathed by the 19th century. The metamorphosis, moreover, of the Saint-Cloud recruitment sheds interesting light on the social uses of the various tracks of higher éducation in the second half of 20th century France.
Paperback - In French - Out of print
Notify me
PDF - In French 14.99 €
Click here to buy from these retailers: