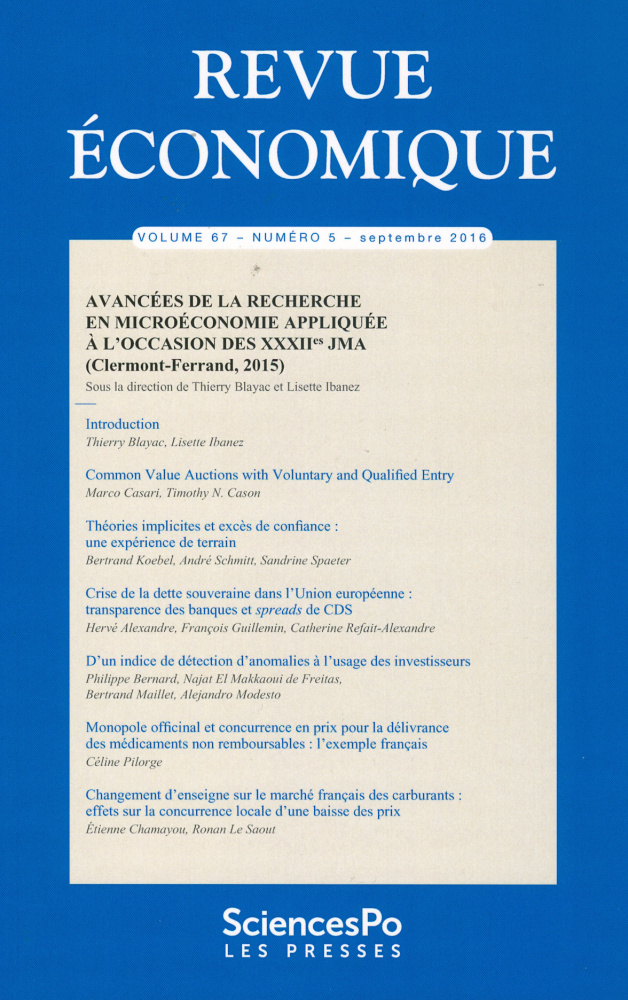 Contents: Common Value Auctions with Voluntary and Qualified Entry - Do self-theories on intelligence explain overconfidence and risk taking? - Disclosure, banks CDS spreads and the European sovereign crisis - An index of detection of anomalies for investors - Pharmacy Monopoly and Price Competition for OTC drugs - Rebranding in the French gasoline Read More

We study auctions under different entry rules. In the field, individuals self-select into auctions and regulations often require them to meet specific qualifications. In this experiment we assess the role of voluntary entry and financial requirements on the incidence of severe overbidding and bankruptcies, which are widespread in common value auctions. We show that voluntary entry amplifies overbidding and increases bankruptcy rates. Qualified entry has only modest impacts on overbidding. This study adds new insights to existing experiments where all subjects are usually placed exogenously into auctions.

Do self-theories on intelligence explain overconfidence and risk taking? A Field Experiment

The way individuals perceive their intelligence plays an important role on people's motivation, achievement and self-assessment accuracy as shown by Carol Dweck’s life-long research. In behavioral economics, overconfidence is shown to play an important role in individual’s preferences and choices. In this paper, we conducted a field experiment to investigate whether self-theories impact overconfidence. Early career Vietnamese executives pursuing an MBA were incentivized. Our sample of managers and professionals controls for a wide range of corporate and demographic variables. The main result of our paper is that self-theories impact overconfidence when taking into account income. As in previous studies, we also find that subjects exhibit significant absolute overconfidence. Gender does not have any impact on overconfidence. We also tested the relationships between self-theories and risk taking.

We investigate the impact of banks disclosure on the evolution of their CDS spreads during the European sovereign debt crisis. We focus on the CDS spreads changes following the announcements of sovereign credit rating downgrades. The disclosure of information helps investors in building expectations and may participate into the reduction of the information risk premium and of the CDS spreads. We assess the cumulative abnormal CDS spread changes (CASC) around sixteen downgrades from 2011 to 2013. We build two disclosure indexes: one general and one dedicated to sovereign exposure. We show that the bank exposure to sovereign risk has a positive impact on the CASC whilst a sovereign disclosure has a negative impact: information thus reduces risk premiums. However, the global disclosure increases the CASC, since investors may disapprove the disclosure of too much abundant and broad information.

An index of detection of anomalies for investors

Fraud detection is a key issue for investors and financial authorities. The Ponzi scheme organized by Bernard Madoff is a magnified illustration of a fraud, always possible when well-orchestrated. Traditional methods to detect fraud require costly and lengthy investigations that involve complex financial and legal knowledge and high skilled analysts. We pursue and generalize here the intuition of Billio et al. [2015], who suggest the use of a performance measure—called GUN—to construct a fraud detection index. To illustrate the methodology and to demonstrate its usefulness, first, we analyze the case of Madoff. Then, in a universe of equity mutual funds marketable in France from several international markets, we secondly highlight the number of funds with an apparent anomalous behavior. The proposed alert system reveals dozens of funds that would be interesting to investigate.

This study analyses whether price competition takes place or not on the OTC (over-the-counter) drug market, on the French pharmacy monopoly. From monthly prices data for thirty drugs and for a sample of 4,700 pharmacies for the period 2006-2008, price levels were compared according to the degree of competition in the area in which the pharmacy was located. The results show that there is very little competition. Whereas the degree of competition varies widely between pharmacies, most pharmacies sell at the same price. These results questions on the effects of a liberalization of the OTC drugs market, in view of international experience.

Between 2011 and 2014, an oil company has developped a discount strategy by creating a new brand from its network of gas stations and a price decrease of 10 euro cents per liter. Using weekly diesel prices of thousands of retailers and a difference-in-differences method, we highlight a weakness of the aggregated response of prices, less than one euro cent, from close competitors. It conceals the increases and decreases in equivalent proportions for the 40% of the stations that react over one cent. The decreases are mainly implemented by the retail stations of supermarkets, whereas the stations of oil groups and independent companies are responsible for the increases. These reactions highlight the important market segmentation, beyond the apparent homogeneity of the product.