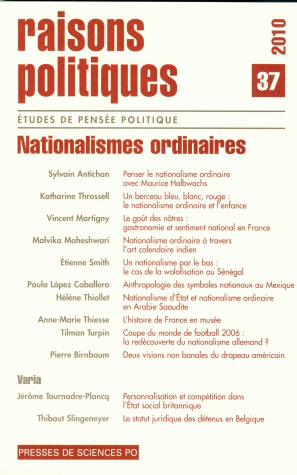 Sylvain Antichan Conceptualizing banal nationalism with Maurice Halbwachs
Based on rereading of his works from the interwar period, this article tends to restore the Halbwachs' contribution to an approach of banal nationalism. He rejects a direct, powerful and homogeneous influence of the national group. The naturalization and internalization of the nation would depend on a historically situated dynamic of interpenetration between the national and the everyday life. The nation conditions individuals' "habits" and "general tone of the feelings" through a national marking of their immediate environment and translated by other social groups.

Katherine Throssell A cradle in blue, white and red: banal nationalism and childhood
This article presents a conceptualization of banal nationalism as a form of socialization to the nation. It therefore draws attention to the role of childhood in the interiorization of the normality of the system of nations and the notion of national belonging. It presents some initial results from an ongoing study that suggests that this interiorization occurs at a very young age and is fraught with tensions and contradictions.

Vincent Martigny Gastronomy and national identity in France: between banal and cultural nationalism
At the crossroads between the state, the market and civil society, the personal and the public spheres, the national and the local, gastronomy is one of the central features of contemporary French cultural identity. This article argues that gastronomy can be analysed both as a form of banal nationalism within the country and a manifestation of cultural nationalism abroad. Inside France, gastronomy “flags” the nation in the daily lives of ordinary people. But in the global world, it also feeds a form of cultural nationalism based on the alleged virtues of French savoir-vivre vis-à-vis other nations. The article also reflects on the intermittent, ailing role of the French state in the definition and promotion of a national cuisine.

Malvika Maheshwari How to represent the Indian nation? Banal nationalism through the Calendar Art
This article describes the way in which calendar art participates in the reproduction of Indian nationhood through the banal perspective, “from below”, of its “ordinary people”. Building on the changing art imagery in India since the post independence period, calendar art is described as a form of banal nationalism that might not really “create” a nation, but has the ability to actively resist or co-opt the nations constructed “from above”. The argument also furthers the claim that calendar art traditions offer a duality of nationalism : along with their mundane everydayness, these images are also susceptible to more overt forms of political nationalism.

Étienne Smith Nationalization from bellow: a banal nationalism? The case of wolofisation in Senegal
Focusing on the expansion of the Wolof language in Senegal, this article discusses the nationalisation process of the Senegalese polity since the independence of the country. The emergence of a national identity, which did not follow the expected path of state nationalizing practices and the diffusion of a cultural model based on orality put the key role of the state and written language in the imagination of the nation to a test. Moreover, the conditions of wolofisation as a nationalisation process from below allow us to understand the emergence of a “banal nationalism” on which the state has no monopoly, what may explain the relative absence of conflictual polarization on the issue of national identity in this country.

Paula López Caballero Banal nationalism : a regime of pragmatical truth ? An anthropology of national symbols in Mexico
The aim of this article is to explore “banal nationalism” from an anthropological perspective which de-centers the State from its own prose. This perspective enables to grasp the nation in its social dimension by putting at the forefront of the analysis the active participation of individuals in the shaping and reproduction of national values. Our case study, an Indian community in Milpa Alta, a Mexico City district, shows that more than a consolidated and rigid whole imposed through a “top down” phenomenon, nationalism can be understood as a pragmatic orthodoxy which meaning is produced throughout the everyday accomplishments of social actors.

Hélène Thiollet State nationalism and banal nationalism in Saudi Arabia: the Saudi nation and its immigrants
The content of National identity in Saudi Arabia has been defined on a narrow ethnic based on Nedji cultural background – where the royal family originates from –, the imposition of a puritan way of Islam and the exclusion of challenging identities. Yet mass consumption, urbanization and participation to the labour force have recast the boundaries of national belonging. This article analyses Saudi ethnic nationalism as it is confronted by immigrants’ communities in a context where public policies are designed for immigrants’ formal exclusion from the National community. Despite urban segregation and regular deportation, migrant communities have emerged in the Kingdom. Using Michael Billig’s concept of “banal nationalism” (1995), this article argues that immigrants reproduce Saudi everyday nationhood through new urban way of life and consumers’ practices.

Anne-Marie Thiesse French National History to the museum: Collective Patrimony and Political Strategy
Announced by President Nicolas Sarkozy in 2009, the creation of a national Museum of French History is connected to the central position held by national identity in recent political debates. National history may be seen as a form of banal nationalism; yet it is often the stage on which contemporary political strife is expressed. While reminding several recent episodes illustrating the political instrumentalisation of national history, this article also outlines the two ongoing aspects taken by this question in French politics : 1) how to define the right of belonging to the nation ? 2) For the current right-wing government, how to neutralise the national master narrative in order to retrospectively delegitimize left-wing ideology ?

Tilman Turpin The 2006 Football World Cup : Towards a rediscovery of a German banal nationalism ?
The 2006 Football World Cup has reintroduced the existence of a banal sentiment of belonging that was expressed in a peaceful and festive manner during the event by the German population. The interprÉtations of this “banal nationalism” by the intellectual and political elites focused on the possible reintroduction of the concept national identity in public discourse and have reduced the normative impact of national history. This article proposes to understand the return of a more exclusive understanding of the nation on the basis of Michael Billig’s theory and therefore to consider it as the essential element allowing to explain the transformation of German identity.

Pierre Birnbaum Civic nationalism or Rights of citizens? About two not banal visions of the American flag
This paper starts with a critique of the idea of banal and unconscious nationalism presented by Michael Billig. Then it aims at demonstrating that Billig’s model cannot be applied to the US, yet a central case study in his theory, where the reproduction of banal nationalism through the “mindless flag” is supposed to be crucial. There the flag can be consciously burnt and desecrated by the citizens ; the Supreme Court is permanently and deliberately protecting them against the civic nationalism defended by the political power.

VARIA
Jérôme Tournadre-Plancq The Time of Choice. Competition and personalization in the British Welfare State
The introduction of choice in public services has become a major issue in the British public debate since the early 2000s. This article exposes the arguments and ideas exchanged, and then examines the various processes of the dissemination of those discussions outside the field of public policy. This approach underlines the “scientific activism” of some multipositioned researchers. It highlights the politicization of the choice in a context of rivalries around the legitimate definition of “progressivism.” These ideas are supposed to make the emergence of a “personalized welfare state” complete. The challenge is also to show what the analysis of these ideas reveals of the beliefs and social representations of the entrepreneurs of choice.