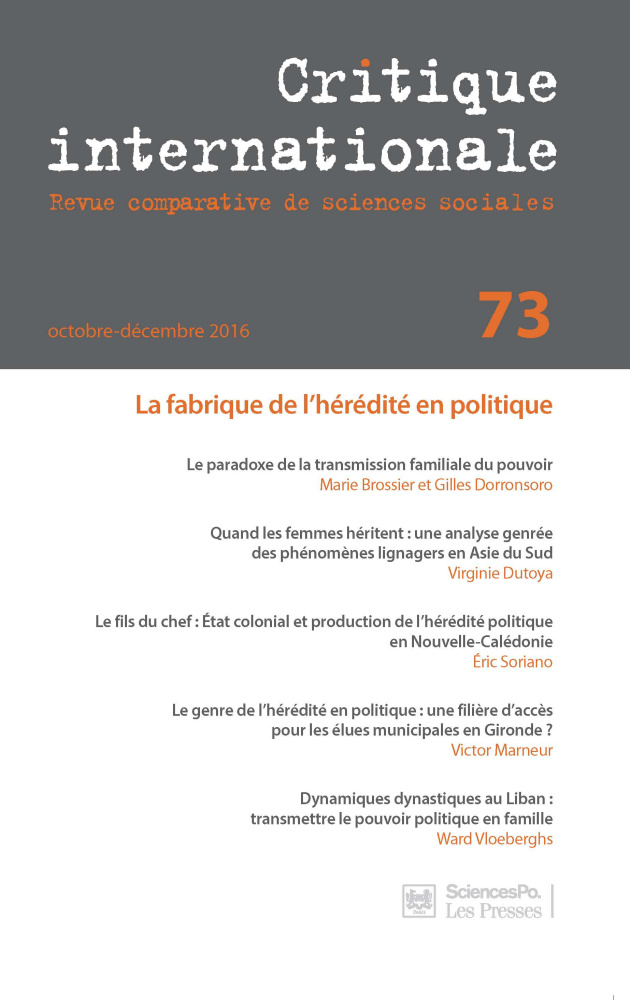 Table of contents: The Making of heredity in politics - When the Heir Is a Woman: A Gendered Analysis of Lineage Democracy in South Asia - The Chief's Son: The Colonial State and the Production of Political Lineage in New Caledonia - Gender and Lineage in Politics - Dynastic Dynamics in Lebanon Read More

The paradox of transmission of power within a family

When the Heir Is a Woman: A Gendered Analysis of Lineage Democracy in South Asia

The importance of "political families" is a familiar feature of South Asian political life. The fact that the role played by "heredity" in this domain favors women in contexts that are otherwise unfavorable to them makes it all the more remarkable. The family, a major site for the (re)production of gender representations and hierarchies, thus constitutes a point of entry to political life for South Asian women. Drawing upon Indian and Pakistani case studies, the present article seeks to examine the dynamics governing the intra-familial transmission of parliamentary mandates from the perspective of gender. Quantitative and qualitative study of women MPs in both countries since 1947 serve to underscore the possibilities and constraints of lineage politics for women. This gendered analysis reveals the complex interplay of familial, social and political power relations.

The Chief's Son: The Colonial State and the Production of Political Lineage in New Caledonia

Drawing upon a study of the over-representation of "chiefs" in the politics of 1950s-era colonial New Caledonia, this article examines the mechanisms governing the hereditary transmission of power in the Kanak world. It is based upon a prosopography of Melanesian politicians following the end of the Code de l'indigénat (1946), research in the archives of the colonial administration and interviews with (present-day or former) politicians who were active at the time. The article finds that the over-representation of chiefs resulted more from their opportunistic use of symbols than from politically leveraging any “traditional” legitimacy enjoyed by lineage. In the Kanak context, what counted was one's ability to control a space recognized by the administration; by positioning themselves at the frontier of the colonial state, these “chiefs” were able to impose themselves in politics.

Gender and Lineage in Politics: A Point of Entry for Municipal Politicians in Gironde?

Rural communes are a propitious environment for the hereditary transmission of municipal office. While several studies have demonstrated the patrilineal nature of this type of inheritance, it is in this connection worth examining women’s prospects for inheriting office. A questionnaire-based survey and a series of interviews conducted in Gironde municipalities between 2012 and 2014 allow one to identify several forms of political inheritance in rural areas. Yet, while some of them operate in the case of both sexes, specific forms exist for passing on office to women. It thus turns out that, in some contexts – particularly those in which there is little competition – inheritance represents an entry point to the political space that allows women to overcome the demobilizing effects of their gender in politics.

Dynastic Dynamics in Lebanon: The Familial Transmission of Political Power

Ever since parliamentary democracy was established in Lebanon in 1926, political dynasties have supplied a remarkably consistent proportion of deputies and ministers. Since they are found in nearly all communities, it makes little sense to classify these families on the basis of religious criteria. What’s more, politics and economics are often correlated in the formation of these families: some seek to protect their property and investments by means of political representation while others consolidate their political ascension by taking possession of profitable activities in the economic domain. Studying the fortunes of two urban Sunni political families – the Salam and the Hariri – allows one to understand how political dynasties are formed, maintained and even reinvented in a competitive electoral system or what passes for such. The mechanisms that are thereby identified reveal the important role played by four resources – family alliances and networking, economic interests, charitable and patronage activities and moderate religious positioning – that together render relevant the concept of political dynasty in post-Taif Lebanon.

An Autopsy of the Two Iranian Elections of 2016

With the announcement of results from the two Iranian elections held on 26 February 2016, the “reformist” and “moderate” coalition and the “fundamentalists” alike claimed victory. Yet the composition of the new expert Assembly and new Parliament reveal a reality that is quite different from that proclaimed by each camp. It shows how the Vienna Accord (July 2014), which exacerbated the issues at stake in these two elections, particularly with the approach of the 2017 presidential election, has rendered the electoral context even more complex. On the face of it, the “fundamentalists’” most powerful electoral weapon – the guided shortlisting of candidates – has run out of steam. With just ten months left to go before the presidential election, the latter now appear powerless. In this context and given the political division that has resulted from these two elections, one cannot rule out the possibility of regime crisis. In order to avoid a repeat of the post-election protest of June 2009, this crisis might lead to the establishment of a parliamentary regime by way of constitutional change.

Legitimation by Law? The Challenges of Family Government in a Muslim Context (Senegal/Morocco)

The reform of family law in Senegal and Morocco has proven an extremely sensitive matter as it involves state action in the private sphere, which has traditionally been governed by competing (religious and/or customary) normative systems. This comparative study examines the manner in which these states redefined family norms and the effect of these reforms on the social order in order to determine their ability to assert their monopoly over legal production. Although relying upon different sources of legitimacy, the two states opted for the same redefinition of Islamic law in keeping with the modernist project they both promote. An examination of the law’s application nevertheless reveals the conservatism of the legal system and the willingness of subjects to circumvent it, both signs of resistance in these societies. While the state asserts itself in its role as arbiter of debate and producer of law, the norm that it promotes does not fundamentally upset the existing social order. Less than a break with the past, these reforms ultimately represent a desire to come to terms with existing normative pluralism.

A Reinvention of Elitist Difference: A Rotary Club in Mwai Kibaki’s Kenya

An ethnographic survey carried out between 2008 and 2011 within Nairobi’s Langata Rotary Club allows one to describe the professional sociability of Kenyan elites who appropriate globalized representations of economic and social success. Organized around weekly meetings and charitable events, the Rotarians’ exclusive social life casts light on the manner in which individual aspirations for economic success, social recognition and selfesteem become mixed with promoting the mantras of “good governance” and liberalization for Kenya. The Rotarians have a paradoxical relationship to the state that consists in avoiding political competition and its excesses while simultaneously imitating the state’s practices of legitimation: bureaucracy, taxation and, by way of philanthropy, public service. The survey thus offers a detailed portrait of the manner in which the “games of symbolic importexport” used by this segment of the ruling classes to legitimate itself play out in the everyday context of these private circles of elite sociability.