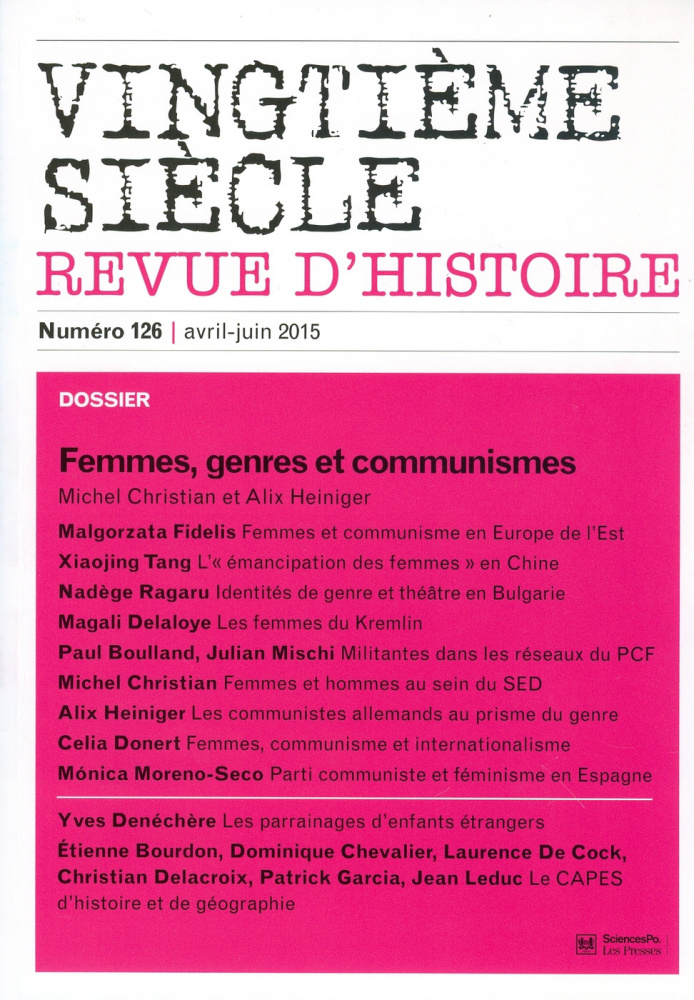 Table of contents: Women on the Fringes?-Was "Women's Liberation" through Work in Communist China (1958-1976) a Fool's Game?-Actresses in Search of Roles-Polina Zhemchuzhina Molotov and the Wives of the Kremlin-The Promotion and Domination of Female Activists in Local French Communist Party Networks-Men and Women in Eastern Bloc Communist Parties.. Read More

Women on the Fringes? Some Reflections on Studies about Women and Communism in Eastern Europe

The article focuses on women as historical agents in postwar Eastern Europe. The first part discusses recent English-language literature on the subject and the need to study gender as a tool in negotiating power between state and society. The second part analyzes experiences of women, who entered male-dominated, skilled, and managerial occupations during the Stalinist industrialization in Poland. Although this was part of the state-led project aimed at the equality of the sexes, these women often contested state policies and pursued their own ideas of emancipation.

This article seeks to contribute to the study of women’s professional and family life during the Great Leap Forward. It analyses the processes that led the State to establish a secondary labour market in the name of women’s liberation. How was this policy implemented, and how did women experience it? Contrary to female executives and statutory employees, these women were considered as "housewives" and experienced a temporary labour system characterised by precarious, difficult and low-wage jobs. In spite of their long factory hours, these women were still stigmatised as “housewives”. From the start, however, they fought for equal treatment and greater independence. The struggles of these women thus constitute an important part of women’s emancipation during the Great Leap Forward.

Actresses in Search of Roles: Gendered Identities and the Dramatic Arts in Socialist Bulgaria (1944-1954)

By studying the social universe of theatre actresses, this article explores the transformations that occurred with regard to women’s identities in Bulgaria, following the establishment of the Socialist regime. At a time when “bourgeois” ways of acting and the allegedly loose morality of these “muses of the arts” were being denounced, actresses were also charged with unprecedented social objectives, while asked to satisfy audiences both old and new. Rather than the disappearance of pre-Communist aesthetics and art forms, these new theatrical roles entailed a kind of turning within. While refusing to establish the existence of an opposition between the Socialist project and its reality, this article reveals that gender identities were filtered through diverse generational and social frames.

Polina Zhemchuzhina Molotov and the Wives of the Kremlin: From Insouciance to Terror

Stalin’s inner circle has often been described as a group of men from which women were entirely absent. However, an anthropological approach reveals the presence of the Kremlin leaders’ wives, who were in fact involved in establishing the interpersonal relationships that formed the basic architecture of the Stalinist élite. By excluding the wives of the Kremlin, the terror modified gender relationships within this microcosm, thereby producing a homosocial group. At the same time, gender relationships also influenced the shape taken by the terror, with women being at stake in power struggles. The trajectory of Polina Zhemchuzhina Molotov is an emblematical case for analysing both the role of gender in the terror and the effects of the terror on gender.

The French Communist Party (PCF) is unique in that its militant base had a higher percentage of women than any other French political party from the Liberation until the 1970s. Who were these women, and what was their position in the organization? We were able to use the PCF’s internal archives to document the promotion of these female activists and simultaneous domination within an organisation led by a male labour elite. By adopting a local approach, this article presents the specific ways that women were active, both in the Party and its networks (municipalities, unions, associations). In particular, it appears that women in positions of responsibility are nevertheless often confined to “working among women”.

Men and Women in Eastern Bloc Communist Parties: The Case of East Germany

This article deals with the role of women and men in ruling Communist Parties, focusing on the case of East Germany’s Social Unity Party (SED). Although women were consistently under-represented in the Party, female recruitment improved starting in the 1960s and ultimately became more energetic than male recruitment. Nevertheless, the recruitment of women reflected, and sometimes emphasised, the gendered characteristics of the various occupational sectors in which the Party was established, a phenomenon which could also be observed in the Communist Parties of Western Europe. Moreover, women were not comrades like any other. Either their specificity as women was denied in the name of a neutral model of militancy, which was in reality based on a male template, or, on the contrary, their specificity was highlighted, but ultimately used to limit their action to specialised spheres of activity seen as inherently feminine.

In the German Democratic Republic (GDR), the Socialist Unity Party (SED) established its political legitimacy thanks to the legacy of its activists’ fight against Nazism. Focusing on both the male and female actors who fought against Nazism while exiled in Western Europe during the war, this article analyses the gendered dimensions of this political legacy. By reconstructing the story of those activists during the war and examining what roles were attributed to them in the conflict’s aftermath, this article shows that the image of the German resistance fighter was not gender-neutral, in particular with regard to the connection established between combativeness and masculinity. The relationship between conflict and the masculine image of activists is thus recontextualised in the long tradition of the German Communist Party.

This article argues that no debate about gender and Communism can ignore the question of internationalism – including the internationalist ideology as espoused by Communist parties, as well as the latters’ international activities in the field of cultural diplomacy, international organisations and technical and non-governmental cooperation. Drawing on the archives of various national Communist parties and women’s organisations in Central Europe from 1945 to 1980, in particular in the German Democratic Republic (GDR) and Czechoslovakia, this article highlights the importance of organisations such as the Women’s International Democratic Federation (WIDF) for understanding how and why women’s rights became a key a political question for Socialist regimes during the Cold War.

The Communist Party and Feminism in Spain: From Antifascism to a Transition to Democracy

During the 1930s, women activists in the Spanish Communist Party (PCE) collaborated with feminist leaders in order to demand equality for women, without, however, defining themselves as feminists. During the Spanish Civil War, the same ambivalence prevailed, for while female Communists never challenged the maternal duties conventionally attributed to women, they nevertheless demanded equal political participation alongside their male counterparts. Over the course of the 1970s, however, traditional Communist political culture, which was based on gender inequality, was replaced by a new climate where Socialism and gender equality went hand in hand. Throughout the Spanish transition to democracy, female Communist activists considered themselves as feminists and demanded that the Communist Party incorporate the theoretical foundations of feminism in its political agenda.