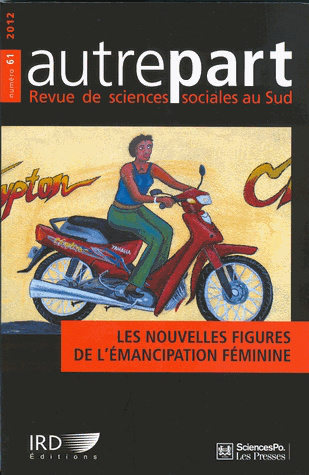 Sylvie BREDELOUP, African women in migration, African women in business trip: when the spatial mobility opens the way of the emancipation
Based on fieldwork conducted in Marseille, Dubai, Hong-Kong, and Guangzhou, the purpose is to shed light on the figure of the African female shopkeeper, migrant or traveller, to bring some answers about the bonds woven between spatial mobility and feminine emancipation. Do these long-distance female storekeepers foresee the possibility of evading or rejecting some family, marital or statutory constraints and of winning both in economic and personal autonomy through distancing themselves from their society of origin, or do they see it as a detour today necessary to consolidate the family fortune as a whole ?
• Keywords: migration – business trip – shopkeeper – gender – Africa.

Luis Lopez ASPEITIA, The Limits of Empowerment: Workers Experiments on the US-Mexican border
During the past forty years, the U.S.-Mexico border has witnessed a deep economic and social transformation. The setting up of multinational enterprises looking for low cost workers attracted thousands of workers, mainly young women, changing the relations between men and women dues to increased participation of women in economic activities. This article explores the social dimension of labour in global assembly factories, questioning the meaning of empowerment and looking at the role of the body and maternity in the management of enterprises.
• Keywords: maquiladoras – gender relations – social participation – residential strategies – social identities – Mexico.

Isabelle CHARPENTIER, The new clothes of female virginity taboo in Algeria – Algerian and Franco-Algerian francophone women writers' books and testimonies
Many contemporary (Franco-)Algerian francophone women writers are breaking the silence on the persistent taboo of female virginity in the traditional patriarchal society. At a time when the demand for hymen repairing appears to be growing, and considering the lack of sociological studies on sexual practices in Algeria, these writers help bringing into light the violent forms of community control over women’s sexuality in an androcentric system. Frontally evoking this taboo – and its moving boundaries – in (auto)fictional writings, they recognize the existence of a female premarital sexuality and make it literarily "visible". In a country where Islam, religion of State, is at the same time dogma and institution, culture and history, they take part more largely in deconstructing and challenging the gender relations based on social relations of power. Based on the writings and testimonies of some of these authors as well as on unpublished interviews, this article aims at shedding light on the strategies to subvert the traditional gendered assignments that these writers and their characters implement, speaking about the new clothes of female virginity taboo in Algeria.
• Keywords: gender relations/gendered assignments – female virginity taboo – Franco-Algerian women writers/literature – code of honour – female premarital sexuality – hymen repair – Algeria.

Nathalie MONDAIN, Sara RANDALL, Alioune DIAGNE, Alice ELLIOT, The complex consequences of male out-migration on Senegalese women and their social autonomy
In this paper, we investigate the impact of male Senegalese international migration on the women who stay behind. We use in-depth interviews undertaken in 2007 with women and men of all ages in a small town where there is substantial male outmigration to Italy. We have two research questions : 1) in what ways do prolonged male absences contribute to redefining left-behind women’s position within the household ? 2) to what extent does this phenomenon contribute to influencing and transforming women’s individual personal aspirations ? Although our results show that migration reinforces some dimensions of traditional male status and domination, there are indications that the migration as a phenomenon will end up shaking up social norms with women rejecting inequalities which have been exacerbated both by migrants’ behaviour and community expectations of these migrants.
• Keywords: migration – gender – access to resources – relations with migrant – wolof – family in law – Senegal.

Béatrice BERTHO, Trajectories and women’s demands in resolving marital disputes based on two case studies in a rural Mossi environment (Burkina Faso)
Drawing on two cases of marital disputes brought by women before the State services in North-Western Burkina Faso, this article analyses the strategies pursued by these women to try resolving their conflicts with their husbands. Set in the wider context of the transformation of matrimonial practices and of conjugal roles, the women’s itineraries are marked by tensions between dependence – on their husbands and their social and family groups – and relative autonomy. They seek to alter the existing balance of power between their husbands and themselves, and to increase the influence they think they have over their own future within what little room they have for manoeuvre.
• Keywords: gender– marital disputes – family relations – empowerment – Burkina Faso.

Katrin LANGEWIESCHE, Emancipation and obedience: Catholic nuns in Burkina Faso through a century
This article describes in a historical perspective how the religious sisters negotiate power and hierarchy within the Catholic Church and in the public space in Burkina Faso. It reflects on the transformations of the notions of emancipation and obedience in this environment and examines the conditions allowing some women to free themselves from social and cultural structures to find personal fulfilment in religious institutions. Interviews with a number of religious sisters shed light on the ways in which these women collectively seize the opportunities to make their voices heard in the public sphere to defend their ideals of justice and peace. Finally, the article analyzes the relations that the nuns have with the world today.
• Keywords: female congregations – emancipation – religious vows – nuns – Burkina Faso – Africa.

Maud SAINT-LARY, When the right of women is said at the mosque. Ethnography of the Islamic ways of emancipation in Burkina Faso
This article presents the role of the Frenchspeaking Islamic elites in gender related public policies in Burkina Faso. The example of a play forum entitled Women’s torment played at the mosque introduces different lines of analysis. The first is to study the logics underlying the partnerships between Islamic associations and international organizations aiming at realising the objectives of “promoting women” in the country based on the actions conducted by activists (men and women) in this area. The second is to try understanding, through portraits of Islamic activists, the involvement of women in French-speaking Islamic structures and the conditions of emergence of an Islamic feminism.
• Keywords: Islam – feminism – public policy – couple – gender – Burkina Faso.

Eric Komlavi HAHONOU, Why not us? Social Status and Political Adulthood of Gando Women in Benin
In African political cultures, being a young woman of servile status seems to combine all the criteria for marginalization vis-à-vis the political sphere. However, since the democratic decentralization reforms in western Africa, the rules of the local political game have changed. In Northern Benin, young intellectual women of servile (Gando) origin have been able to gain positions of power after the 2008 cities elections. This article analyzes the conditions of this female political emergence. Without questioning male dominance or being mere instruments of male politicians, these political women have been able to seize opportunities and to negotiate their position in public decision-making structures. Developmentprojects have played an important role in this process. These changes in the political structures have also in turn altered the local political cultures.
• Keywords: emancipation – women – political culture – decentralisation – social status – slavery – Benin.

Christine VERSCHUUR, Patching up poverty or feminist commitment in the working class neighbourhoods of San Cayetano and Gamboa in Latin America
This article presents the results of a research on gender relations in people’s movements conducted in two working class neighbourhoods in Argentina and Brazil by a network of local researchers within the framework of Unesco’s MOST programme. The research shows that women actively participate in the neighbourhood’s organisations to resist, organise services, and undertake activities. While confronted to multiple difficulties, they claim and open new spaces of negotiation and intervention, questioning the power relations between men and women at the domestic and neighbourhood levels. This article discusses how another way of thinking and doing politics in these territories is under construction and how these women engage in feminist practices of social change.
• Keywords: gender – popular organisations – urban – feminist movements – Argentina – Brazil.