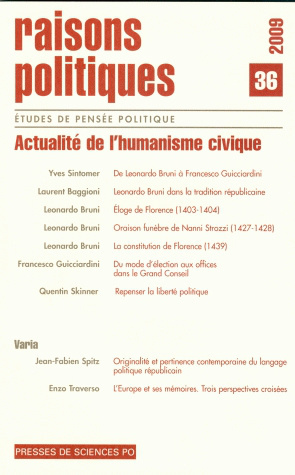 Table of contents: From Leonardo Bruni to Francesco Guicciardini: the topicality of civic humanism? - Leonardo Bruni ht the republican tradition - In Praise of Florence - Oratio For The Funeral of Nanni Strozzi - On the constitution of the Florentines Read More

From Leonardo Bruni to Francesco Guicciardini: the topicality of civic humanism?
The first objective of this issue is to remedy the weakness of the francophone research on Leonardo Bruni and civic humanism and to contribute to a réévaluation of Francesco Guicciardini. Although most Hans Baron's seminal thesis have been convincingly criticized, they remain stimulating: Leonardo Brum's texts do not reflect the real political order of that time but do etnbody a civic ideal that systematize and refonnulate republicatiism. The reinvention of politics that had begun a century before in Florence could therefore have a crucial impact on the development of modern political thought. A carefd text analysis shows nevertheless that there is not one unified, but contrasted republicanisms, which differ among others on the social question and on the alternative self-government v. representative government.

Leonardo Bruni ht the republican tradition
Republicanism enjoyed renewed favour in the 20th century, especially in english-speaking political thought: Thanks to a considerable wealth of research, the notion of republic has been put under close scrutiny, both historically and theoretically. This article aims at reconstructing the genealogy of this reflection, through the examination of the different readings that have been proposed for a writer "rediscovered" by this new ftradition of thought: chancellor-humanist Leonardo Bruni (1370-1444). Since the pioneer works of Hans Baron (1900-1988), the interpretation of Bruni has constituted one of the main focal points of neo-republican thought; one purpose of this study is thus to highlight the epistemological, historiographical and political questions at stake in the interpretation of Bruni, and consequently in the elaboration of the republican attempt at reconceptualizing politics.

In Praise of Florence
This text is considered by various authors as the founding manifesto of civic humanism. Written in a rhetorical genre, it constitutes a piece of propaganda in favor of the Toscana Republic. In the extracts that are translated here, Bruni presents Florence as defending an ideal of liberty that she inherited from Athens and the pre-imperial Rome. The florentina libertas implies the independence against foreign powers (most notably Milano, ruled by a Duque and whose expansion had been stopped by Florence), but also a Republican order characterized by the rule of laiv, citizen equality wider the law, a system of check and balance and a social equilibrium between riches and the poor.

Oratio For The Funeral of Nanni Strozzi
Written at a time when Florence had a huge influence in the literature, in the arts and in architecture, due among others to the invention of the perspective, this oratio funebra is a tribute to one of the author's friends but also the occasion for a new panegyric of the city of Florence. Bruni analyses the city brightness in the culture, in military affairs and in politics as resulting of one singular process. He advocates the Republican patriotism and underlines that the institutionalization of liberty constitutes an incentive for citizens to get honors through the defense of the common good. The popular regime enables each one, according to his merits, to take part in the government of the city. Republic is therefore a system that promotes virtue, when oligarchic regimes tend to foster the courtier spirit.

On the constitution of the Florentines
This short treaty offers a systematic picture of Florentine institutions at the time of the first Medici domination. It presents the Tuscan city as a mixed constitution. This Republic is characterized by two exclusion principles: both manual workers and noble families remain outside the citizenship circle. In addition, the mercenary army (instead of the popular militia) and the fact that the legislative councils cannot decide their own schedule and cannot freely deliberate on the Signoria bill proposals (but only approve or reject them) are aristocratic features. Conversely, the emboditnent of the vivere libero ideal in the institutions, the fact that offices are held for a short period only and that those who hold the offices are chosen through random selection are crucial democratic dimensions.

On the Election to Public Offices in the Great Council
This pro et contra text gives the frame of the debate on electoral devices that took place in the Florentine Great Council at the end of the IS1' Century. The advocates of the "first past the post" method (called "delle piu fave ") opposed those who favored random selection (the "tratta ") among those councilors whose competence had been previously recognized through vote. Facing this alternative, Renaissance Florence rediscovered the aristocratic nature of election and the democratic dynamic of sortition. This text offers one ofthe first modern theoretical defenses of representative government and presents a critique of election that in many aspects anticipates contemporary sociological and philosophical arguments.

Rethinking Political Liberty
The aim is to question the consensus rival scholars have reached about the English revolution. Even if they disagree on its scale, most find that subjects' liberty is indeed violated in this era, as they are illegally deprived of their rights. The article proposes a novel view of civil liberty, based on Roman and common law, stating that a free-man s status can be lost even without rights violations, as a free-man does not depend on another's will. Dependence confers the status of a slave, even if rights can be exercised. This idea may solve two puzzles about this era: which principles do the Levellers and their opponents use to limit the right to vote? and how does Parliament legitimize armed resistance against the king?

The relevance of contemporary republicanism as a distinct political language. An historiograpbical and analytical approach
The paper is a contribution to the question of how distinct the contemporary political language is from mainstream liberalism. Putting aside debates on the supposed communautarian or comprehensive character of contemporary political republicanism, the paper tries to show that, when confronted, at the end of the 18h century, with the necessity to give birth to some stable political institutions, classical republicanism just dropped out those of its archaic components which were radically incompatible with modern society but that it did not thereby convert itself to some kind of liberalism because it kept alive the central idea of the republican tradition: individual freedom in terms of non domination implies some kind of equality of resources and this, in funis, implies that the right of property cannot, in a society based on individual freedom, be considered as absolute or unconditional.

European Memories. Entangled Perspectives
By contrast with the two preceding centuries, which were shaped by the impact of the French and Russian Revolutions, the 21st century has begun under the sign of the eclipse of Utopias. The disappearance of a visible "horizon of expectation " has generated a charged memory of the 20th century as a time of violence, totalitarianisms and genocides, encapsulated by the image of their victims. Analyzing the commemorations of May 8, 1945 — the anniversary of the end of the Second World War and of the Sétif massacre — this article distinguishes three main spaces that define Europe's memories: a Western space shaped by the remembrance of the Holocaust; an Eastern space dominated by the legacy of Communism; and a postcolonial space exhuming the continent's imperial past. In spite of the conflicts that it entails, the conjunction of these different perspectives can prove fruitful both hermeneutically (as a tool for rethinking European history) and politically (as a means of reformulating an idea of citizenship that transcends national divisions).