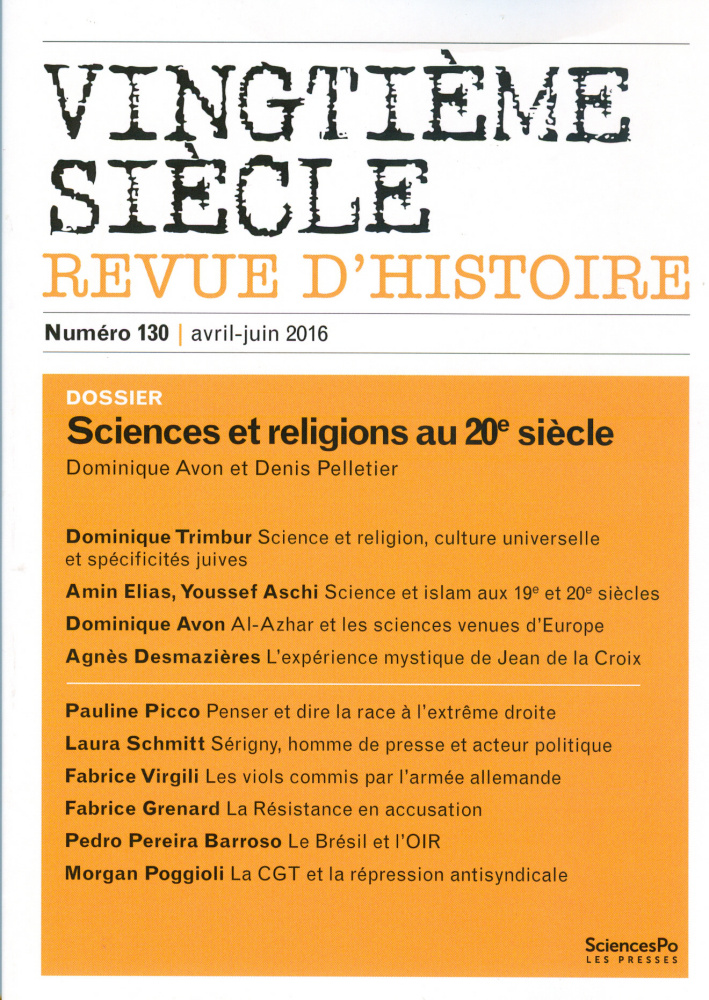 Between science and religion, the dispute is old. This issue compares the three monotheistic traditions and the relationship between scientific reason and religious reason is built. The authors analyze four case studies borrowed from Christianity, Islam and Judaism. Read More

Science and Religion in the 20th Century: An Introduction

This article presents an overview of the changing relationship between science and the three major religions of Christianity, Islam and Judaism, from the end of the 19th century until today. The reception of Darwin's work, the development of the humanities and social sciences, and the rise of psychology were at the heart of a confrontation, one of the main stakes of which was reconciling with the legacy of the Enlightenment. The clashes and compromises experienced depend on the organisation of each religion's highest official bodies, including the latter’s ability to take into account the critical dimension of scientific research. The degree of conflict also depends upon epistemological changes in the social and life sciences. This history includes a strong political dimension, in a context marked, especially since the 1970s, by the increasing mobilisation of religious vectors of political engagement.

Science and Religion, Universal Culture and Jewish Particularities: The Hebrew University of Jerusalem, from its Creation until the 1940s

Within Zionism as a national Jewish movement, the Hebrew University of Jerusalem plays a specific, if not central, role. As an institution of higher education, it is tasked with embodying cultural Hebrew renewal, as a distinct entity from the inherited traditions of the diaspora and the solely religious aspects of Judaism. The article examines the origins of this institution and its function, as established by the founding fathers of the Jewish national movement. It first outlines the different elements of Jewish science, religion and culture within the theoretical Zionist ideology that existed before the university was established. Then, the article looks at the role of these elements in applied Zionism, illustrated during the university’s first decades by the creation of separate curricula for "Jewish science" and "general science".

Science and Islam in the 19th and 20th Centuries: From the Primacy of Religious Science to “Scientific Miracle” in the Quran

Napoleon’s 1789 Egyptian campaign, as well as its symbolism as the advent of European civilization in the Levant, armed with science and philosophy, was seen as a crucial moment for Islamic and Arabic thought. For the first time in the history of Muslim civilisation, many ideas were confronted their modern European counterparts. During the 19th and 20th centuries, Arabic philosophers debated the notion of “science”. Whereas some adopted the modern definition that was independent of all religion, others remained committed to a definition of science that was linked to religion, making the Quran the ultimate scientific arbiter.

Al-Azhar University and Western Science: Changing Course at the End of the 1950s

Since the fall of the Fatimid Caliphate, Al-Azhar University has remained the central institution of Sunni Islam. Like all denominational training establishments that hold a monopoly over knowledge, the university was forced to face the challenge posed by the profound transformation of the scientific world between the 17th and the 19th centuries. Following an initial period of total rejection, the university began to open up: students were sent to Germany, France, and Great Britain during the first part of the 20th century. Among these students, Sheikh al-Bahi became an authority within the university as reformed by Nasser. His dual qualifications gave him the opportunity to find decisive arguments to justify locking down the core of the training, i.e. the “religious sciences”. The surrounding context of decolonization would continue to encourage support for this position.

As religious psychology became established as an academic discipline, during Interwar France, the mystical experience of Saint John of the Cross became paradigmatic of the shifting relationship between the social sciences and Catholic philosophy and theology. Catholic religious psychology, which, in order to acknowledge the supernatural dimension of religious life, was more experimental than speculative, began to gradually emerge, in particular thanks to the teachings of historical criticism. Under the influence of the social sciences, theology was also driven to adopt a more phenomenological approach. The very relevance of mystical experience was itself finally challenged by the development of psychoanalysis.