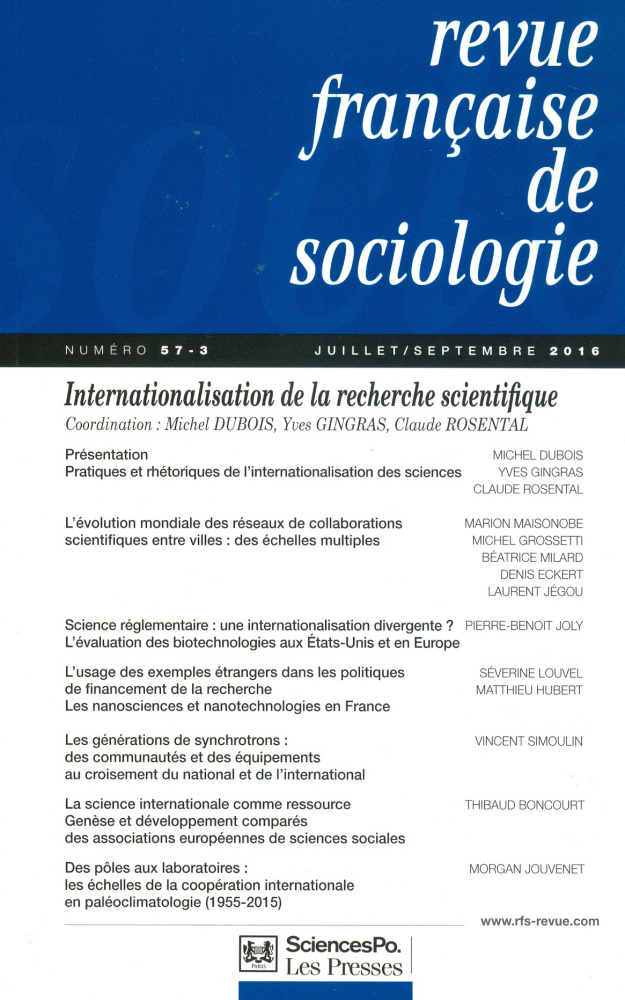 Practices and rhetoric of the internationalization of science

For years, studies of scientific activity have shown an increase in international collaboration. This observation has given rise to various generalizations based on the assumption of a gradual globalization leading to the eradication of national contexts in favor of specialized international networks. In this article we re-examine this issue based on all the publications compiled in the "Web of Science" database between 1999 and 2007. Analysis of these data highlights the phenomenon of a growth in collaboration that encourages both the internationalization and increased density of national and local networks to the detriment of non-collaborative publications; this to true for all disciplines. Thus for research, international exchanges do not conflict with national contexts and language or cultural areas, but articulate with them. Similarly, the increased density of national science city networks contradicts the hypothesis of the increased centrality of so-called major international agglomerations and presents a more diverse picture of the development of global scientific activity.

The Evaluation of Biotechnology in the United States and Europe

This article seeks to highlight persistent differences in regulatory science on an international scale. Scientific knowledge is generally considered to be universal, and thanks to international trade liberalization, considerable efforts have been made to harmonize technical regulations, so why do such differences persist? Drawing on a comparative and cross-national case study on the assessment of the risks linked to animal cloning for food, the author examines coproduction of the context of regulatory science, and its substantive content. Two different ways of producing regulatory science are identified, each which combines different ways of knowing (ways of reasoning, cognitive schemes, categories and concepts) and different ways of regulating (institutional architectures, regulatory resources, sources of authority). The analysis shows that the performance of regulatory science is strongly embedded in institutions which bear the hallmark of their national histories. This is a source of persistent divergence in the assessment of biotechnology.

Public Funding for Nanoscience and Nanotechnology in France

This article examines the influence of major international paradigms on nanoscience and nanotechnology funding policies (nanoS&T) pursued in France during the 2000s (1999-2013). It is concerned with how foreign examples become exemplary (in the sense of "exemplar" as used by Kuhn, 1990) to the extent of being regarded as public policy solutions. Using extensive field surveys in the field of nanoS&T, the article shows that the paradigmatic value of foreign examples derives from “editing work” (Sahlin and Wedlin, 2008), i.e. de-contextualization and re-contextualization which establishes their relevance for certain dimensions of science policy. It highlights three key terms of this editing work –one which creates an example of a prototype for public policy, one that lists comparable examples more systematically to define a concept, and finally one which borrows from management techniques– and identifies the key actors in the development of national programmes and the creation of local innovation clusters in nanoS&T

The Synchrotron Generations: Communities and Facilities at the Crossroads between the National and the International

This article examines how major types of scientific facilities, namely synchrotrons, and the research they enable, are diffused through a dialectic between the international and national levels. This circulation is particularly marked by the transition from one generation of facility to another. Synchrotrons illustrate an internationalization model that is neither that of the concentration of research in one single device in the world, nor that of a device that adapts to multiple uses due to the activities of communities at the interstices of science, technology, industry and politics, but that of facilities that multiply through the gradual attraction of new user communities. Scientists encourage this development by working between the national and international levels, to the point where the difficulties of international cooperation, such as communication problems, isolation, and conflicts between representatives of different nationalities, are erased.

How and in what way are the social sciences becoming internationalized? To answer that question, this article compares the genesis and development of eight European organizations in five disciplines: sociology, economics, anthropology, political science and psychology. Social science internationalization is found to involve several distinct types of competition: rivalries between scientific paradigms, competitions between different academic institutions, and geopolitical power balances. Internationalization operates as a resource that can be used on these various levels or scenes in the framework of preexisting, inseparably intellectual-institutional conflicts. However, the use of this resource has fairly uncertain effects. The actual extension and practices of the associations studied are sometimes not in line with their original aims; and it often happens that actors lose control of the process of scientific internationalization that they have themselves set in motion.

From the Poles to the Laboratories: Stages and Scales of International Cooperation in Paleoclimatology (1955-2015)

Ice Core Science (ICS) is a paleoclimatology specialty aiming to reconstruct the dynamics of past climates, from laboratory analysis of ice samples drilled in Greenland and Antarctica. The field idiosyncrasies and the geopolitical stakes attached to these polar territories explain why this specialty has been characterized, from its beginnings, by strong international cooperation. This article relates the meaning and forms of this cooperation, focusing on the organization of field work by scientists, and presenting their coordination in the global network enabling the flow of brittle climate archives from the field to the laboratories. The historical analysis reveals a strong initial influence of the Cold War on international cooperation in ICS. But it also shows how the ICS community has consolidated its presence and credibility beyond this context, changing the polar environment's very nature in the course of the global warming debate. Finally, the many faces of ICS's internationalism provide an empirical fulcrum for the renewal of the discussion about the treatment of context in science studies, as the conclusion of the paper argues.

of Institutional Restructuring on Universities and Intellectual Innovation

Masters of Uncertainty. Weather Forecasters and the Quest for Ground Truth