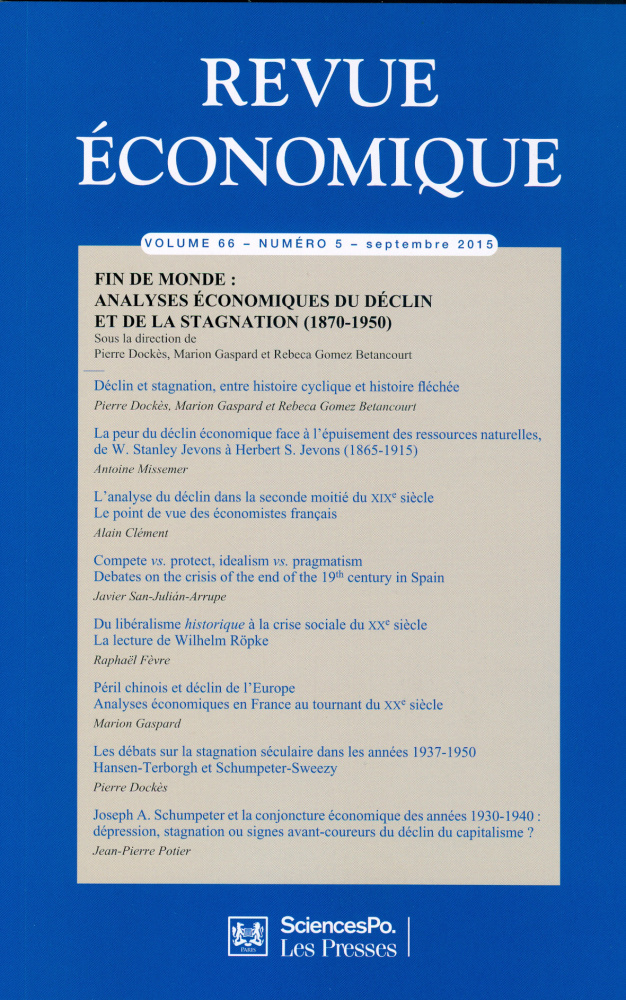 Table of contents: The Fear of Economic Decline Facing Natural Resources Depleton - The Decline Analysis in the Second Part of the Nineteenth Century - Compete vs. Protect - On Röpke's View of the Twentieth Century Social Crisis - Chinese Peril and European Decay - The Debate on Secular Stagnation - Schumpeter and the Economic Climat Read More

Economic Decline and Stagnation, Between Ciclycal history and Linear History

From the 1860s, the unprecedent prosperity state of Great Britain faced a new threat: the exhaustion of coal resources. W. Stanley Jevons is the first to clearly emphasize the risks of coal depletion for the economic future of his country. Fifty years after him (in 1915), his son, Herbert S. Jevons, extended his father's analysis in multiple ways. If these two authors share the same idea that resource depletion is a matter of production costs more than physical shortage, both do not indicate the same channels to avoid industrial decline, a fear that remains a strong feature of the late-19th century British economic thought.

The Decline Analysis in the Second Part of the Nineteenth Century

The Point of View of the French Economist

Compete vs. Protect, Idealism vs. Pragmatism

The big agrarian crisis of the 1870s and 1880s hit the Spanish primary sector, unable to compete with overseas production. The slump triggered discussions among Spanish economists and other intellectuals on its causes and potential effects, on the measures of economic policy that the government should adopt to face it, and on the validity of radical liberal tenets which had inspired the economic policy and dominated the panorama of economic thought in Spain until that moment. The crisis became a global topic for discussion, permeating the Spanish public opinion; debates were held in a vast range of institutions (journals, economic and cultural associations, public conferences, the Parliament, etc.). Through an analysis of some of these debates, this paper shows how the economic crisis not only prompted outstanding intertwining controversies on many issues, but also acted as an agent of change in policies and ideas. It significantly contributed to a shift in economic policies, replacing free trade policies established since 1868 with protectionist policies to preserve domestic markets, but also to the definitive decline of doctrinal economic liberalism in Spain and the emergence of an alternative pragmatic liberalism, which accepted some sort of government intervention allegedly to protect social and national interests.

On Röpke's View of the Twentieth Century Social Crisis

The characteristic features of the civilization crisis described by Wilhelm Röpke (1899-1966) could be understood as an attack against collectivism and planning. Massification in all spheres of society reaches an apex in the economic field, mainly through big business' concentration and the enslavement of workers. Nevertheless, Wilhelm Röpke dismisses both historical liberalism and socialist planning. This article shows that his refusal is grounded in a specific historical interpretation: that of a causal pathway from one (liberalism) to the other (planning), with respect to the intensification of the same harmful trends. Therefore, the social crisis of the twentieth century follows from the inner decline of liberalism. We can understand the contemporary period solely by the analysis of primary causes, which are rooted in the previous century. The study reconstructs this complex discourse by linking Röpke's cultural, sociological and economical fields of inquiry.

At the end of the 19th century, in the context of a general concern about the alleged « decay of white races », the Treaty of Shimonoseki (1895) opens the perspective of an industrial revolution in China. The paper studies how economic concepts and theories are used to evaluate the possibility of a « Chinese Peril » for Europe, but also how the debate, while progressing both from conceptual and a methodological viewpoints, relies on racialist representations to estimate the relative value of key economic indicators (wage, productivity, initiative, speeds of capital accumulation and technological transfers, institutional efficiency).

The current debate on the secular stagnation finds the one launched by Keynes and Hansen (Full Recovery or Stagnation) during the 1937’ double-dip. It reached its peak at the end of the war with an anti-stagnationist book by Terborgh (The Bogey of Economic Maturity), the replies of Hansen and his followers and the intervention of many American and European economists. What were the arguments of each other ? Schumpeter was the most famous opponent to Hansen and new dealers. He will publicly oppose the young marxo-hansénien Paul Sweezy in a debate (1946) that Samuelson celebrated as a tournament at a time « when giants walked the earth and Harvard Yard ».

Joseph A. Schumpeter and the Economic Climate of the 1930S-1940’s: Depression, Stagnation or Warning of the Capitalim’s Decline?

The Great Recession triggered by the u.s. subprime crisis and its consequences gives rise to new questions which lead us to the problem of stagnation and economic decline. Therefore it is useful to revisit the analysis proposed by Joseph Schumpeter about the economic situation of the 1930s and 1940s. Is it for him a Kondratiev depression analogous to that of the period 1873-1897? Or are we dealing with the coming of a secular stagnation, as it is supported by Alvin H. Hansen? This study analyses the criticisms by Schumpeter of the arguments defended by Hansen. It gives also the opportunity to remind the Schumpeterian decline thesis, based on the degeneration of the capitalist order.

Compete vs. Protect, Idealism vs. Pragmatism. Debates on the Crisis of the End of the 19th Century in Spain