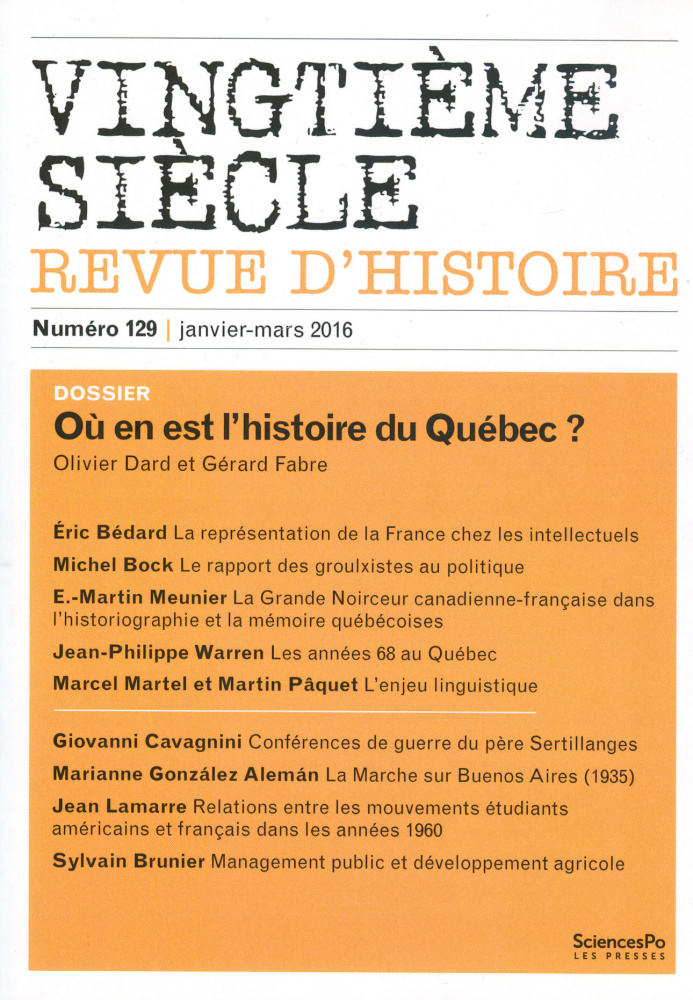 Knowing contemporary Quebec, the debates and the issues that dominate the country (nation, language, religion) is essential to understand this French America and to rethink the terms of transatlantic relations and transfers. Quebecois historians and sociologists offers to review the historiography of Quebec. Read More

Reaction as Legacy ? The Representation of France by Quebecois Intellectuals since the 1960s.

Quebecers have always had a fraught relationship with France. While the traditional elites admired the France of the Grand Siècle and Louis XIV, they nonetheless rejected the country's republican ideals. This article seeks to illustrate that, since the 1960s, Quebec’s French heritage has been totally discredited by the most well-known Quebecois intellectuals. These new modernist elites simultaneously reject France’s inequitable Ancien Régime and its republican model of integration for immigrants, which has come to be seen as intolerant in light of the recent debates on secularity. The appeal of the concept of "Americanness" and the support for liberal multiculturalism expressed by intellectual elites in Quebec help to explain this rejection of French heritage as a whole.

Groulxism and Politics: A Relationship between Temptation and Mistrust

This article offers an analysis of Lionel Groulx’s relationship to politics during the interwar years. By subordinating his nationalism to Catholicism, which he consistently refused to instrumentalise for political purposes, Groulx developed a traditionalist and providentialist ideology that paid little attention to questions of the regime or institutional reform. This in turn left Groulx relatively shielded from the influence of Maurrassism. Groulxism did contain, however, a measure of ambiguity toward the political inasmuch as it envisioned, to some extent, the creation of an independent “French State”. The growing dialectical tension between the national and religious issues within the realm of French Canadian ideology was one of the main causes behind Quebec’s Quiet Revolution in the 1960s.

More than a specific historic period (from the 1930s to the 1950s), the Grande Noirceur, or Great Darkness, is often viewed as an era to be rejected. It is a period that has achieved quasi-mythical status in Quebec’s modern narrative. This constitutive myth is a means by which to manage the past, attempting to account for the period’s so-called authoritarian legacy. Representations of the Great Darkness, while often presented under the guise of scholarly history, in fact put forth a sort of “mythistory” that perpetuates a dominant narrative from generation to generation. This article examines both the discourse that created and propagated the idea of the Great Darkness, and the counter-discourse that has attempted to challenge its veracity and historical scope. Our goal is not to determine the degree of 'darkness’ of the period preceding the Quiet Revolution, but rather to explore the milestones leading up to the social and historical construction of the 1960s movement, and to better understand the more recent deconstruction of these mythologically burdened narratives.

1968 and its Aftermath in Quebec: Comparing French and Quebecois Student Movements

This article compares the student rebellions which shook both France and Quebec in the late 1960s. We do not limit ourselves to merely juxtaposing facts, but seek to identify the points of contact that existed between these two geographically distant societies. Breaking with most traditional studies which simply assess France’s influence on the orientation of Quebec’s student groups, this article furthers the analysis and looks to establish an interpretive model, which, borrowing primarily from French studies, enriches our understanding of the various factors that fuelled political activism in the late 1960s on both sides of the ocean. Key words: Quebec, student movement, social movements, sociology, 1968.

Linguistic Stakes in Quebec: Power Relations and Citizen Engagement since the 1960s

The issue of French as the language of public use in Quebec has created tension and conflict for many decades. An inescapable historical reality, the language issue has re-emerged dramatically, and sometimes violently, since the 1960s as a product of citizen activism. Faced with these tensions, the State of Quebec has legislated to promote the use of French in the public sphere. This article offers an analytical overview of the language issue in Quebec. It adopts a political perspective in order to identify the causes that led to citizen mobilisation on the question of language and the strategies that the government has adopted to manage this social debate.